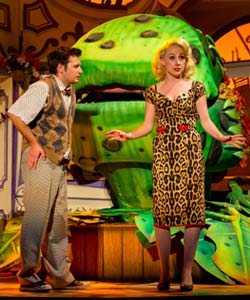 Having lived in Manchester for almost 3 years now I have been embarrassed that in all that time I have not visited the theatre. When I saw that Little Shop of Horrors was coming to Manchester I knew I had to finally change that. As a huge fan of the 1986 movie I knew this was a musical that was right up my street. Who doesn’t find a certain appeal in a ravenous meat eating plant!?

The Palace Theatre which played host to the play is a fantastic venue and was absolutely rammed on opening night. The acting quality and production value is absolutely obvious and this is a play that warrants the laugh out loud moments. For those who don’t know the story the events follow a young man called Seymour who lives in down trodden Skid Row in New York working in a failing plant shop. He pines for Audrey, the sweet young lady he works with but worries he has nothing to offer. She is dating the not so nice Orin, the dentist who delights in causing other people pain. One day Seymour stumbles across a strange and peculiar plant which starts to attract customers and media attention. The plant (or Audrey II has Seymour names it) has needs of its own and craves human blood if it is to survive and grow, it promises Seymour fame and everything he desires if he helps give the plant what it wants.

As for the production we were treated to at the Palace the acting quality was top notch and I have to give a special mention to Stephanie Clift who played the role of Audrey. She absolutely got the character spot on the mark, in terms of voice, comedy timing and acting she really was an absolute powerhouse on stage and if you have seen the 1986 film you absolutely need to see her performance, she really was incredible.

The singing talents of all the cast need to be praised, the majority of the story is told through song so it really is testament that the actors keep up the same spirit from beginning to end. Rhydian as the sinister and sadistic dentist is of course hilarious and it is easy to see why he is now one of the UK’s most sought after stars of the stage. As horrible as Orin is it is impossible not to laugh at the interpretation that he brings to the stage.

If you can still get tickets to see the show I highly recommend that you get them now, there are still shows until Saturday 5th November. For those who frequent the Palace often you know you are going to be treated to a high quality entertainment and the theatre staff are warm and welcoming. I’d like to say a massive thanks to the Palace and the Production team for a fantastic night.

For more info and with still time to book Click here.