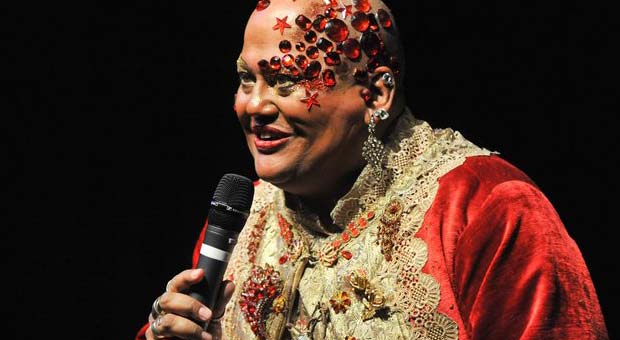 Laugh Riot for Pride in Trafford

Sale Waterside Arts Centre presented a one evening only event on 20th May as part of Trafford Pride. It was billed as “Laugh Riot” (and we did) and it was hosted by the incomparable compere Jonathan Mayor with 3 stand-up non-gender-specific people of a humorous disposition. Well, sort of.

After Jonathan’s initial soliloquy we had “Red” to entertain us, who did their best , but the act needs a bit more work. Just identifying as non-binary these days is becoming more comfortable for those who identify – who cares anyway – but it wasn’t quite enough to keep us engaged for the whole set. One to watch though.

Next off was Lesbian Kate Mc Cabe. Here, self-denigration took on a new meaning. The problems of needing to pee, and how to do so when you really need to go when you’re a person whose down-below plumbing doesn’t lend itself to doing so against a wall, had us in stitches. I clearly need to perfect my pelvic floor exercises.

As an American, her observations of the British mentality is well honed and the section relating to our apparent obsession with home renovation programmes was truly hilarious.

An interval then ensued, and I gained a lot of knowledge from some small pamphlets, published by the LGBT Foundation,  scattered around the bar:

A guide to oral sex – which certainly introduced me to a few things I’d never thought about.

A guide to vaginal sex – which as a gay man of a certain age was an interesting discovery.

A guide to safe chest binding for those with dysphoria – which gives sound advice on wrapping one’s upper torso so that unwanted protuberances are minimised. As someone who identifies as gay and male, and with a somewhat larger than wanted pair of moobs I’ll study this one.

After the interval, our host entertained us a bit more before ceding the last slot to Bethany Black, who hit several nails fairly and squarely on the head. We all roared.

Jonathan closed the evening in his own inimitable style. It’s a shame this was a one-off event, but I’m sure we’ll hear more from everyone.

All in all, this evening was a great collection of LGBTQ talent and hats off to Pride in Trafford for programming the entire week of performances.