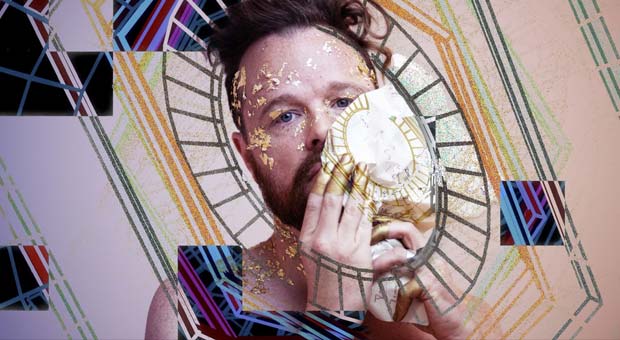 Larkhall was a one off performance on the opening night of Manchester Fringe 2022 that took place at the International Anthony Burgess Foundation. He’s a composer (and a good one), pianist (ditto and for some reason plays in socks rather than shoes), and a programmer specialising in algorithmic graphics that breathe life into his compositions via Oto – his technological creation that renders them on screen. This was an interesting evening of very different disciplines meeting. It’s a small performance space, but the acoustic was perfect and its size lent a bit of immediacy.

He and Oto collaborate and deliver the goods via piano and some hidden speakers that render other instruments, with a back projection to deliver the visuals. The billing indicates that the software (Oto) “turns the nuances of each performance into reactive visual projections”, so it’s a pity this was a one night only event as I’d like to go round again to compare performances on different evenings to see just how Oto reacts to differences on what’s being fed in. For example, if the piano slows down (or stops), how would the visuals change?

Given that the imagery was computer generated I was expecting fractals and similar but these were only hinted at once. The easiest piece to follow the interaction was called How to Actually Change Your Mind where a multi-coloured matrix was filled up in response to the piano notes being played and, again, it would have been interesting to see it slowed down a bit (you can find it here https://youtu.be/IQvPMBl-ljI).

Larkhall is touring, and future dates (where some of the performances are repeated over a few days) are on https://www.larkhall.org/ where some other video clips can be found.