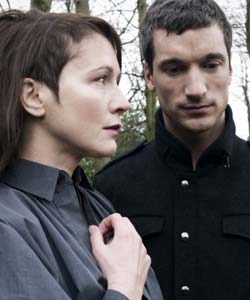 Lamb live at the O2 Ritz

Lamb and The 02 Ritz, Manchester have a 20 year long relationship: after all, it is home. It seems unbelievable that their eponymous debut album was released in 1996, yet tracks like ‘Trans Fatty Acid’ and ‘God Bless’ still sound so fresh in their unashamed drum ‘n’ bass/trip hop beats. What does make the longevity believable though is that some of the crowd have certainly ‘matured’ and some of the 90’s party kids have mellowed. I remember seeing them in 2001 for the first time at the same venue, at 18, feeling so young and super cutting edge.

Lou looks ethereal in her favoured shoulder pads and angelic in all white (no ‘Gabriel’ pun intended). She is typically nonchalant but always oozing presence and the voice just continues to improve lying somewhere between Stevie Nicks and Malin from Niki & The Dove, though still so distinctive with an extra richness these days. Andy is still the charismatic ‘mad fer it’ Manchester lad who would annoy us if we hadn’t known (and loved) him for so long; their juxtaposition has always been key.

They kick off with ‘In Binary’ from their 2014 album Backspace Unwind, which sounds as amazing as it did when we first heard it and really is Lamb at their electronic best, complete with lasers and big bass. Similar is the title track a few songs later. The set list is very similar to their 2014 tour and is heavy on the most recent album, but ‘Little Things’ from Fear of Fours and the ‘What Sound’ from the album of the same get huge receptions.

As well as the bass and beats, Lamb have always excelled when they are lyrically pouring their hearts out and ‘Gabriel’ is a pin-dropping moment, only surpassed by the epic ‘Gorecki’ during the encore. With such a strong back catalogue now, 2003’s Between Darkness and Wonder doesn’t get a look in sadly but we do anticipate the ‘special gigs’ later this year that Lou mentions and hope we get a few more lost classics plus new material possibly.

The Independent described Lamb as “middle class and unthreatening” a couple of years ago. To that I would suggest them paying close attention to the musicianship, the melodies and the honest candour of the lyrics. Middle-aged maybe, but still doing what they love best - maybe that’s unthreatening but it definitely isn’t boring. And what’s so middle class about writing your first album in a basement in West Didsbury…? *wink*