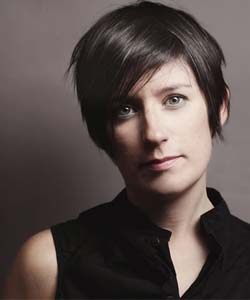 What a treat this was and what a shame that there were so few people there to see it. Kim Edgar is a young singer songwriter who lives in Edinburgh and “one of Scotland’s undiscovered gems” (Daily Record). And she certainly is.
The Studio Theatre at the Met is a small inimaye studio which would be very full with 70 people there and was the ideal venue to listen to Kim. The first song she sang called “House on the Hill” had many false ends but did not manage to catch out the audience as it had done on many previous nights as we were told by Kim.

Her songs ranged from the happy (with a chorus of 1,2,3,4,5,6,7 which was soon learnt by the audience and sang along to enthusiastically) to songs about domestic abuse, a song she wrote for a friend who was suffering but Kim felt unable to talk to her about it and wrote it in a song instead.

Another song “Hands held” is about a tradition in which betrothed would have a hand holding ceremony before they were to be wed or having a civil ceremony. All the songs were accompanied either by a piano or guitar, both of which Kim is a very accomplished player, having been classically trained on the piano.

Passionate about the social and emotional benefits of singing and music making, Kim leads a children’s choir at The BIG Project - a youth and children’s charity, based in Broomhouse, Edinburgh - and was featured working with Gareth Malone on BBC Children In Need 2011. She leads singing and songwriting workshops across Scotland, and recently composed a multi-choral commission, Breakthrough, for the Usher Hall (Edinburgh) and Celtic Connections (Glasgow).

Kim also enjoys arranging strings, and playing piano for other artists including Karine Polwart and Annlaug Borsheim (Norway). Kim has sung for the Queen at the opening of the Scottish parliament and appeared on “Later with Jools Holland”.

For more information visit www.kimedgar.com and, if you get the chance I would recommend going seeing this singer.