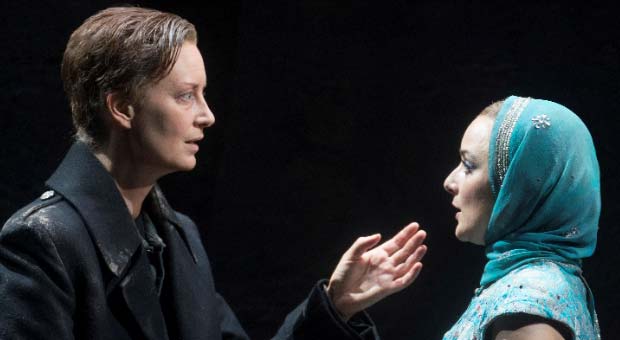 The umbrella title for Opera North’s Autumn season is “Tales Of Our Time” and after the first instalment of Puccini’s La Bohème (see previous review) and the second instalment last night of Giulio Cesare you can see why. From Tuesday nights tale of young love, to Wednesday nights story of political intrigue, Opera North are really exhibiting why they are the market leaders of performance of opera here in the North.

Last night’s thrilling production of Handel’s Egyptian epic Giulio Cesare was outstanding. Tim albery’s production explored with such passion Cleopatra and her brother, Tolomeo, vying for the throne when Julius Caesar arrives in Egypt in pursuit of an enemy. This compelling tale of politics, vengeance and desire is performed against the backdrop of Leslie Travers’ dramatic and beautiful spinning box design, representing not only the darkness but contrasting with the gold and opulence of the time.

One of today’s leading early music conductors, Christian Curnyn, conducted the orchestra, which perhaps were a little overpowering at times especially as we listened to Swedish contralto Maria Sannermaking (Ceaser). Nevertheless, in her Opera North debut, Sannermaking did excel in the role and almost seemed to embrace the spirit of Julius Caesar in her dramatic performance. However, the night clearly belonged to Lucie Chartin. Chartin (who also joined the Company for the first time as Cleopatra), steals the show. She is confident, melancholy, yet passionate and aggressive as she wields her sword in Act 2 and locks heads with her brother. Her coloratura is just outstanding, gracing every note, ornament and phrase with such grace. Indeed, this opera is such a wonderful display of the voice as an instrument that it has to belong to the singers and you have to be the best to successfully achieve a thrilling performance. Undeniably, the cast are outstanding.

The season offerings end at the weekend, with Martinu’s The Greek Passion. Readers should be advised that this is only being performed at The Lowry, Salford on Saturday. Set in a remote community, Martinu’s final opera explores the divisions created in a village when a group of refugees arrives. An urgent plea for compassion and tolerance, the opera was written when Martinu was himself an exile and reflects Opera North’s status as the only opera company in the UK to be awarded official Theatre of Sanctuary status. A thought-provoking look at those seeking haven awaits and I for one cannot wait!