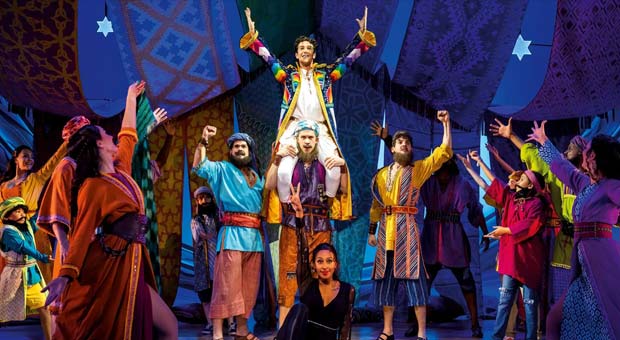 Joseph and the Amazing Technicolor Dreamcoat 2022

When Tim Rice and Andrew Lloyd-Webber were asked to create a short 20-minute musical piece for a London school concert, little did they know what they had started. 55 years later Joseph runs at 2 hours and has become a global phenomenon.

The musical toured for many years, had a huge makeover in 1991 at the London Palladium, with Jason Donavan taking on the title role, and re-ignited pre-pandemic with the unknown, straight from drama school, Jac Yarrow taking on the technicolour dreamcoat. The 2022 production kicks off in Manchester before embarking on a 7-month tour of the UK and Ireland.

And what a production it is, seamlessly morphing a school production with West End spectacle. Yarrow once more reprises his Joseph – young, innocent, ambitious – with a cheeky smile and belting voice; a more mature Donavan returns as the show-stopping Pharoah, swinging his hips and squeezing every bit of adulation out of his audience.

But it is the irrepressible Alexandra Burke who shines bright as the narrator (and many other roles, including Jacob) – she leads from the start, rarely off stage, hitting every note and dance step with ease. A tiring role for any performer, but even more impressive when you’re 7-months’ pregnant!

The cast are clearly loving it, particularly the younger performers who help remind us that this started out as a school production all those years ago. These are not ‘token’ children – they are integral to the show, playing brothers and wives alongside their adult counterparts, and taking on some of the key cameos: Potiphar, Baker, Butler, and more.

The staging is vibrant, with dazzling sets, and new and bigger dance routines. We all know the big songs, but my highlight of the night was the beautifully staged. starkly contrasting, Van Gogh-esque Those Canaan Days.

This perfect night out for young and old is colourful, camp and foot-tappingly awesome - just brilliant! Brilliant!! Brilliant.