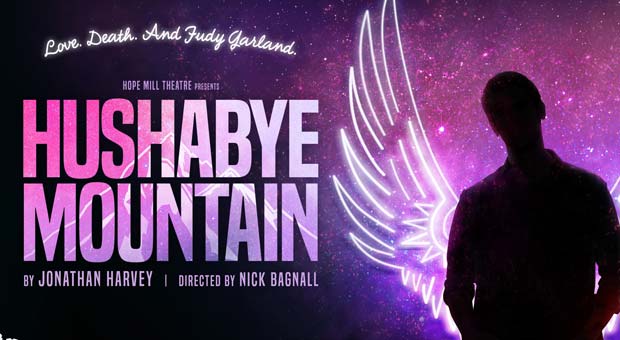 To an LGBT+ audience of a certain age this play will be no stranger. First performed in 1999 at the Lyceum Theatre, Crewe, Hushabye Mountain reveals a world that has learned to live with AIDS. I had the pleasure of seeing this in March 1999, then directed by Paul Miller and starring Andrew Lincoln of

the BBC’s “This Life” fame” in the Library Theatre located in the vaults of Manchester Central Library.

As one of the first ever LGBT play’s I ever saw, it is a memory that has lived with my friends and I, largely because of the way it addressed AIDS, alongside first love, peer pressure, acceptance and conflict in quite a ground-breaking way.

Hushabye Mountain was hardly the first play to bring angels and AIDs together, but what makes this play so special is the dreamlike, illusory, trancelike, fantasy world that is created mingled with moments of reality. It is a world full of love, pain, laughter and friendship, where drugs in their various

combinations are exhilarating, destructive, costly and even life restoring.

Danny, played in this production by the remarkable Nathan McMullen, is a young man, waiting to be let into heaven. However, there seems to be some difficulty about getting there. Nevertheless, Judy Garland (Jodie Prenger), provides reassurance as she passes by in a boat full of stars. Away from the dreamlike and unexpected version of the afterlife, the people who were closest to Danny struggle with his death from AIDS and must find a way to live with his loss. His partner Connor (Layton Williams) is flattened by grief and groping awkwardly towards a new relationship. Connor’s brother Lee, played by Matt Lee and his wife Lana (Amy Dunn), who was Danny’s best friend, find their new marriage overshadowed by the hole Danny's absence has left in their lives and Danny’s complex mother Beryl (Jodie Prenger), who had kept in contact via increasingly paranoid letters after Danny’s father disowned him, is now in a psychiatric hospital and being updated by Judy Garland about her son’s progress towards heaven.

Nathan McMullen and Layton Williams are extraordinary in this piece. The talent of these two young stars is astonishing and quite rightfully they both have a CV to match. Both actors use Harvey’s witty and crisp dialogue to their advantage, the feelings and emotions required are so fully realised that we are drawn into Harvey’s fantasy world and go with the flow even during the odd, random moments and sharp juxtapositions of imagination.

We watched the live version that was steamed from Hope Mill Theatre on Saturday 5th June 2021.

The ensemble is accomplished, confident and bring an air of credibility to the room that we have come to expect from Hope Mill Theatre. Unfortunately, we found that there were some issues with the quality of the stream, particularly the audio. However, these were brief and as the curtain falls Jodie Prenger fills with her voice the sails of boats that are waiting, and as the curtain falls down over lullaby bay, you really do feel that gentle breeze from Hushabye Mountain, waiting to sail your troubles away.