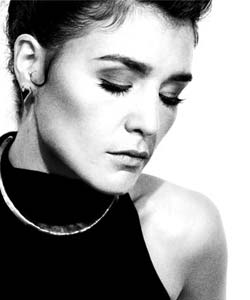 Mercury Music Prize nominee Jessie Ware returns to Manchester, welcomed by a sold out, trendy (horrible word though it is) crowd. She begins in sedate fashion with album title track Devotion, dressed fantastically in all black, with a cut-out, heavily shoulder-padded jacket, retro baggy 'mom' trousers and trademark ginormous earrings.

The voice really begins to find its range with Night Light, Sweet Talk and early single 110%, which really gets the crowd going. Jessie has the great knack of not over-singing and when least expecting, belting out a stunning note. Comparisons to Sade might be lazy, but should be taken as flattery. Jessie’s top notes though, are undoubtedly stronger. Her banter is brilliant and whether referring to the venue as "amazing, though it smells of shit" or her mother as a "Jewish Princess", this lady is as likeable as she is talented.

Jessie manages two generally unheard of feats too: firstly she previews a new track, which people actually love, channelling her "inner Chaka", and secondly proves that drummers can sometimes sing as she bring her nervous, but charming drummer to the foreground to sing a duet: he almost sounded like a very early Michael Jackson.

Finishing with her most recognisable songs Wildest Moments and Running, Ms Ware has us eating out of her hands with her understated, elegant, yet down to Earth charisma. The songs are so wonderfully constructed and often refer back to classic 90’s R'n'B. The only disappointment is that she doesn’t sing the stunning Something Inside.

Having spent many years as a backing and guest vocalist for various garage/dubstep acts, there is no doubting who the rapidly rising star now is. On the previous note, Laura Mvula is also definitely on the up, providing a great support performance. Confident and armed with a band including a harp and a trio of strings, she channelled the unorthodox nature of Bjork at times. As for Jessie ware: bring on the sophomore album.

For details of Jessie.