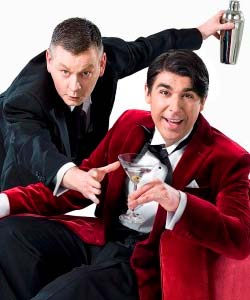 Jeeves and Wooster at the Lowry

PG Wodehouse created an enduring body of characters within his Jeeves and Wooster stories. They follow the fortunes or rather mis-fortunes of one Bertie Wooster and his almost ever present valet Jeeves and are set during the 1930's, a time of change across the world.

Wooster often finding himself in some sort of scrape or other caused by a misunderstanding, one of his friends problems or by one, of what seems an endless line, of his aunts and their 'simple' requests.

It is at this point in the stories that the indomitable Jeeves will present a solution to his master's problems and hopefully, resolve the situation with the best possible outcome. However, things rarely go as planned, a truism in life.

'Perfect Nonsense' is on a UK tour and is tonight at the Lowry, Salford Quays. It is based on one of the best known stories 'The Code of the Woosters', which has all the classic situation comedy elements and a would-be political dictator (a spoof on Mussolini and Hilter) thrown in.

The play opens with Bertie relaxing in an armchair as he starts to regale the latest trouble that has interfered with his playboy lifestyle. Aunt Dahlia has asked him to go and sneer at a silver cow creamer that her husband has agreed to purchase. He is to suggest that it is 'Modern Dutch' in an attempt to get the price reduced...

Inevitably, it is this simple request that leads to a series of episodes that Bertie progressively finds harder and harder to extricate himself from in true comedic form. The rest of the plays events I will leave for you to discover.

Opening on an almost empty stage the sets are created in front of your eyes, by Jeeves, to recreate the scenes as they are described by Bertie. This, alone, is worth watching.

The scenes are full of energetic choreography, quick change magic and rapid scenery movement each adding to the productions appeal.

Jeeves and Wooster are played respectively by Math Sams and James Lance, with Steppings played by Robert Goodale who, with his brother David, created this stage adaption of The Code of the Woosters.

They are a joy to watch and clearly understanding that comic timing is everything within these stories. Not to forget the excellent Wodehouse dialog and story being sharp, fast paced and extremely funny.

I recommend that you take the chance to see this laugh out loud real winner. It runs at the Lowry until the 8th November and you can get tickets by clicking here.