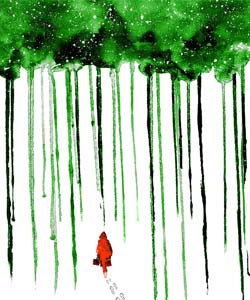 Into the Woods at The Royal Exchange

On the outskirts of the city lies a fantastical forest where curses are reversed and wishes can come true. In the shadows of the trees something magical, fanciful and strange is happening, but wishes are dangerous beasts to manage.

This new production by the Royal Exchange opened and we were there too.

Stephen Sondheim’s Into the Woods is back in favour, due to the recent Disney film version starring Meryl Streep, Anna Kendrick and Emily Blunt. Unlike, the house of mouse movie, the original stage production is not really suitable for little ones.

Imagine if at the end of a fairy tale, there was no ‘happily ever after’ – reality bites and even the good are punished. That is the premise behind James Lapine’s clever and original book. As soon as you sit down to enjoy Matthew Xia’s inventive take on Little Red Riding Hood, Cinderella and Co, as they step Into The Woods – you realise how in the round staging totally suits the material.

The only flaw with the piece is down to Sondheim really, as the first half is as close to musical perfection as you could get. So the second act, pales into comparison as it is very repetitive and leaves the cast walking round in circles. But, this flaw aside, Xia directs with energy, flair and total respect for the material, resulting in a rollicking take on traditional fairy tales that never feels grim.

The huge cast rise to the challenge of Sondheim’s sardonic songs and Jason Pennycrooke’s wonderful movement and dance moves with ease. Natasha Cottriall is delightful as a greedy Red Riding Hood, Michael Peavoy is wonderfully creepy as a jock strapped wolf and a smarmy Prince and Amy Ellen Richardson is suitably dreamy as the Baker’s Wife.

Isabelle Peters is in fine voice as Rapunzel, Francesca Zoutewelle is a streetwise Cinders who is ably matched by David Moorst’s naïve Jack and West End star Alex Gaumond is excellent as the Baker, relishing the opportunity to get up, close and personal with the audience. Gillian Bevan’s Witch could have aped Meryl Streep, but instead chooses to play her as a Svengali who treats other characters like chess pieces. She is tremendously majestic.

Marc Elliot and Michael Peavoy deliver the brilliant “Agony” with so much humour and nudges and winks, that it is hilarious from start to finish. Jenny Tiramani’s excellent set design is a character in itself and has plenty of surprises in store. This means that every inch of the theatre is used, thanks to Xia’s dynamic direction.

I personally would have liked to have seen the Giant,(a Giant boot would have sufficed)  as Maxine Peake’s booming recorded voice, accompanied by some illusions and John Leonard’s superb sound never quite conveys the earth shaking feel of something larger than life. And Amelia Cavallo’s circus style turn as Cinderella’s mother feels like one party trick too far, as there is more than enough going on, without it.

But this minor quibble is overcome due to the fact that Matthew Xia’s production is so much fun and smile inducing, that it reminds you how lucky we are to have such a wonderful company such as the Royal Exchange in Manchester.

Into the Woods at the Royal Exchange Theatre until 16 January.