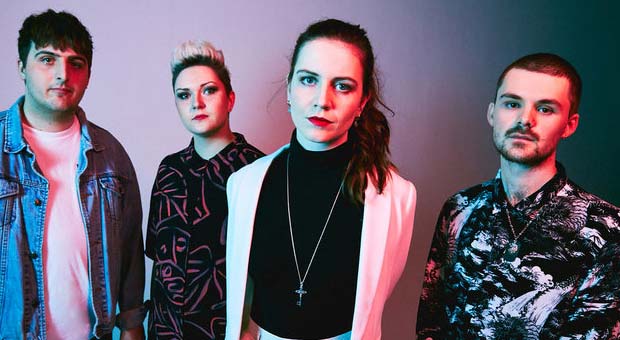 Interview with Another Sky

London-based quartet Another Sky released their debut album, I Slept On The Floor, on Friday August 7th to widespread critical acclaim. And it’s easy to understand why. There is a duality in these monumental songs that perfectly encompasses our world today, particularly for the younger generations - a sense of melancholy but also of empowerment, as we fight with a growing angst for what we believe while wondering with increasing urgency if we can make a difference.

I had the privilege of interviewing singer Catrin Vincent and guitarist Jack Gilbert on the eve of the album’s release, and there was certainly an infectious energy brought on by the excitement of what Jack later verbalised as “getting through the hurdles… to get to this point.”

As is the case with any new and youthful band emerging onto the music scene, it’s common for aspiring artists to find encouragement in their story. With that in mind, my conversation with Catrin and Jack began with what inspired them to become musicians in the first place.

“As a young kid, I was interested in lots of stuff and just one day my grandad was like ‘oh, I’ve got a guitar, do you want to have a go?’, and I had a go,” Jack reflected. “I know it sounds pretty basic - but, from that sort of moment, I realised I wanted to be a musician. I was like 9, but I just knew.”

Whereas Jack’s decision to become a musician was, as he put it, “quite random and sudden,” for Catrin it was more gradual. She explained: “We got a piano when I was 2, and my sister was getting lessons; and I used to sneak in after she played for a bit, and try and learn what she was playing.” And then years later, “guitar lessons were being offered at school, and I just sort of picked up on it.”

Yet even though their ambitions blossomed in different ways, their flourishing talents are likely due to the dedication they both share in following their dream. Catrin mentioned that she and Jack “both have stories of locking ourselves at school, in music rooms. We went to separate schools, but we both have that in common: lunchtimes, just locking ourselves away.”

Catrin has spoken in the past about the pivotal moment in her life when she moved away from her small hometown to live in the country’s capital and study music at Goldsmiths University. This is another similarity she shares with her fellow band members - not just Jack, but bassist Naomi Le Dune and drummer Max Doohan as well - as they all braved the big city “from these small UK places”; and in fact it was at Goldsmiths where the four met.

Before this transition, Catrin preferred sleeping on the bathroom floor to her bed in case her anxiety caused her to be sick at night - hence the album’s autobiographical title. Many of us who have spent our lives in one of these countless, seemingly insignificant towns that Catrin said “all feel very synonymous with each other” can relate to this in some way - that feeling of being trapped within invisible limits, suffocated by a lack of fulfilment.

“Moving to London, you just completely change - especially if you’re going into the arts. Your whole identity changes,” Catrin told me. “It does open your horizons a lot, and introduces you to so many new and different people.” But she also stressed that she didn’t want to “project this utopian image of London, because London comes with its own struggles: rent has just risen while wages haven’t; like, we have gentrified London by moving here.” She concluded by saying, “I guess I don’t know how I’ll end up feeling about London, because it looks like we won’t be able to stay forever, so… Oh God, maybe I’ll end up moving back to my hometown!”

When asked if either of them had any words of wisdom for anyone else who feels similarly trapped where they are from, Jack replied, “don’t be afraid to just leave. Even if where you’re going you don’t know anyone. I’m from the Isle of Wight, and I moved to London just totally not knowing anybody here. And I was really, really, really scared. But, it was the best decision I’ve ever made.”

The band’s first live performance took place only three years ago, but since then Another Sky has experienced a rise of truly meteoric proportions. Catrin and Jack described some of the band’s greatest achievements to date, of which there are a considerable number already. “Being able to release our first album,” Jack laughed.

Catrin’s highlight so far was making an appearance on NPR Music’s Tiny Desk. She spoke about her time working in an “infamous thrift shop in London” where people would spend the days watching Tiny Desk. “And I remember, 2018,” she explained, “just working there and thinking ‘oh my God, I’ll never get on this; oh my God, it’s such a pipe dream’... one year later and we were doing it. That sort of blew my mind.”

“For the band, over the years, there’s been a lot of things like that,” Jack continued. “Like Jools Holland happened really early for us, in 2018. So, like it’s kind of hard to - there’s so many amazing things really.”

We concluded our conversation with a message from the band to their fans. Catrin spoke: “You can always talk to us. We never want to be the kind of band that don’t want to talk to our fans. So, if the music’s touched you, please let us know and we can have a chat. And we can ask you about your life. I’m actually really interested in fans’ lives at the moment; lockdown’s sort of given us that: that we can talk to fans more. And it’s really interesting being able to talk to so many different people.”

Another Sky are planning to tour the UK in November and December in support of the album - current global crisis permitting, of course. “The whole tour is just going to be an absolute pleasure if we can do it,” Jack said in regards to this. “Just meeting everyone from all across the country is always amazing.” The tour is set to begin on November 11th at EartH in London, and the band will (hopefully) be coming up to Manchester to perform at Star & Garter on November 27th.

In the meantime, be sure to check out the album. Catrin’s unique vocals cut through the beautifully ethereal melodies like a searchlight through fog. This clarity in her voice extends to her politically charged lyrics, which contain an internal strength and astute perception that suggest having overcome much adversity; together with truly masterful musicianship, Another Sky succeeds in creating an intensely immersive experience. I Slept On The Floor feels more like the offering of a veteran band than a debut.