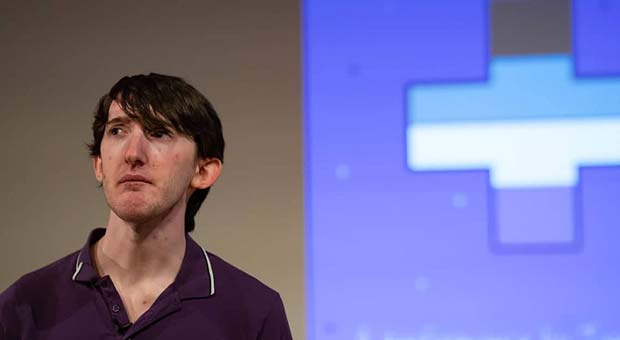 How would you define 'ASEXUALITY'?

Here is what Google throws up;

'Asexuality is the lack of sexual attraction to others, or low or absent interest in or desire for sexual activity. It may be considered a sexual orientation or the lack thereof. It may also be categorized more widely, to include a broad spectrum of asexual sub-identities'.

James Riley in IN THE PLUS provides us with his own version based on his life experiences in a one hander piece at Fringe favourite lOCK 91.

While you're waiting for the theatre to fill, there is an original song playing about how asexuality highlighting that it isn’t choice, likening it to a Tuna melt that you enjoy on your own. You work out the anaology but it is kinda catchy.

As the play begins, a over voice explains how plants reproduce asexually without the need for a partner. James then takes this notion further and explains, with the aid of a potted plant that he’s not a plant but human being.

He then proceeds to eat cake as a euphemism for sex and how some asexuals refer to sex as having your cake and eating it.

This was, on balance, a good method of helping his audience to begin to understand the complexities around the subject.

The play takes a turn to more physical comedy where James begins to run away from the pressure of Asexuality to eat cake including the smashing of cake on his face by members of the audience, this we found largely redundant.

Elements of this performance are difficult to watch, including random movement with and without a flag in hand, but the really powerful parts occur when James hones in on his own personal story at various times in his adult life.

In the Plus opens up a relatively new subject matter for me and I certainly learned a lot more in just 45 minutes.

Lock 91 is also a new venue to me and provided the ideal place for this performance.