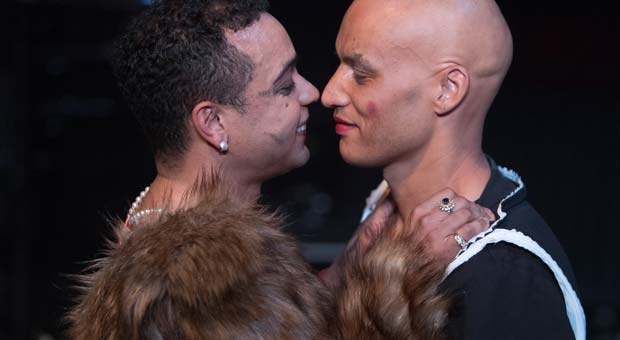 Based on the true crime story of murderous duo The Papin sisters, this Autumn our headline production is a radical telling of Jean Genet’s infamous The Maids.

Our Garry Thomas-Lowde tells us what he thought..

"This deadly game of ritual, role-play and rubber gloves is a macabre insight into the mind of its author – Jean Genet. Translated by Martin Crimp, HOME’s production of The Maids disorientates, yet fascinates.

Entering the auditorium, we are greeted by Dr Who Auton-esque characters who mingle amongst us playfully, sometimes scarily, stealing personal items, teasing hands seductively. The space itself has undergo a remarkable transformation: previously a 3-tier proscenium theatre, it is now two-levels in the round, with the old Circle now the Stage level. A brilliant design that captures the intimacy and claustrophobia of the evening.

A prologue reveals Genet in prison, a frequent abode for a variety of crimes, encompassed in a small cage-like space to the side of the arena, with his face live-streamed onto a large screen above our heads. On a white board he tauntingly labels famous faces (Hitler, Mary Berry, himself) as good/bad, bon/mal; then tears them down to reveal writing on the board: the title of the play; and so The Maids begins. Loosely based on the infamous Papin sisters who brutally murdered their employer and her daughter in 1933, The Maids introduces us to Claire and Solange, and their Mistress. Whilst the Mistress is away, the maids role-play grotesque scenarios focussing on the murder of their boss.

Fluidity of gender; duality of character; reality versus fantasy; incest; homo-erotica are all explored in this dark drama. Are they ladies? Are they prisoners? Who really is the Mistress? So many moments to question, but there is no question about the quality of the gender-swapped casting. Jake Fairbrother (Claire), Luke Mullins (Solange) and Danny Lee Wynter (Mistress) are haunting, passionate, mesmerising. Driven by Lily Sykes’ imaginative direction, this makes for a grotesquely fascinating evening that, at its end, will have you heading to the bar in silence as your brain computes what you have just seen, then debating for an hour as the questions cascade from your mind."