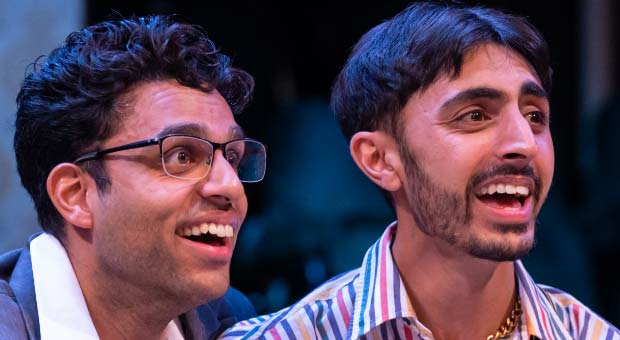 For the Royal Exchange’s latest production, Tanika Gupta has reimagined her 2003 adaptation of the classic tale, moving the story of the Hobson family forward 100 years to the Ugandan-Asian rag trade of Manchester’s Northern Quarter. Hari Hobson runs a tailors on Tib Street, assisted by his three daughters – Ruby, Sunita and Durga.

Whilst the daughters work unpaid, Hari spends most of his time drinking in the Crown and Kettle. The arrival of a wealthy customer changes the course of their lives forever. Atri Banerjee’s direction perfectly captures the 1980’s era and offers an insight into the challenges of Northern Quarter life of the time.

Henry Hobson’s life in his 1880’s Salford cobblers translates perfectly into Hari Hobson’s 1980’s world of the Manchester rag trade. Tony Jayawardena is suitably Lear-ian as the patriarchal Hobson, unknowingly treating his daughters poorly until it is too late.

Shalini Peiris (Durga) excellently conveys the strong northern female of her time, running the family business as an astute business woman in parallel with looking after her two sisters (Safiyya Ingar and Maimuna Memon). But it is Esh Alladi who steals the show with impeccable comic timing as the downtrodden Ali Mossop.

This colourful production of generational relationships lights up the Royal Exchange stage. It is vibrant, touching and, above all, hilariously amusing.