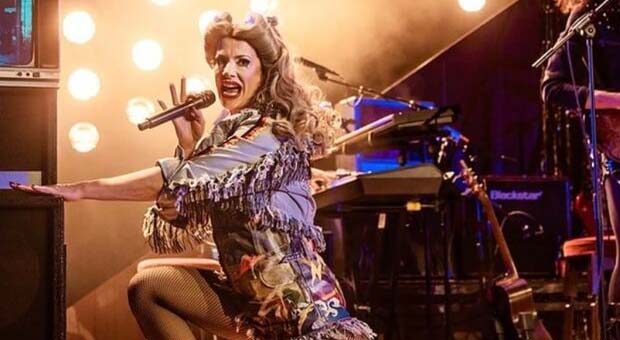 Hedwig and the Angry Inch

For those of you fortunate enough to remember the original, this major reworking of Hedwig and the Angry Inch will not disappoint. For those who don’t, you’re in for a treat – and a major one at that.

I first saw the film in Australia around 2002 and was initially reluctant about its message, but 30 minutes in, I was hooked. This revised production for the stage blows the dust off and injects a new urgency into things. We’ve come a long way since then, and for Divina de Campo to play the main role shows just how far we’ve progressed.

Divina (they/he/she),in the leading role of Hedwig,is a hedonistic genderqueer anti-heroine seemingly hellbent on destruction who embarks on a journey of self-discovery with her husband and roadie, Yitzhak,played wonderfully by Elijah Ferreira (he/him).

They are accompanied on stage by their rock band ‘The Angry Inch’. The band, who play live on stage, is led by Music Supervisor and Musical Director Alex Beetschen(he/him) on keys, Frances Bolley (she/her) on lead guitar, Isis Dunthorne (she/her) on drums and Jess Williams (she/her) on bass.

The plot just about follows the original, mutatis mutandis, given that this is a staged event, and even more impressively so with a live band.

The combination of Divina's soaring vocals and the sheer power generated by the band, really rock the place to the point that you almost forget you are in a theatre.

It’s about an hour and 45 minutes – there isn’t an interval – but the time just flies by. There are some very funny (and irreverent / non-PC) episodes punctuated with seriousness, and at those moments you do have a lump in your throat. The final rejection mirrors the film’s closing moments but Hedwig ends up on a high and brings the house down.

In Divina aka Owen Richard Farrow, we surely witnessed the arrival of stardom and should this show be transferred into London, then this will surely be underlined.

Credit too to Jamie Fletcher  for some deftly handled direction.

Go, before it moves on.

Details and tickets are here