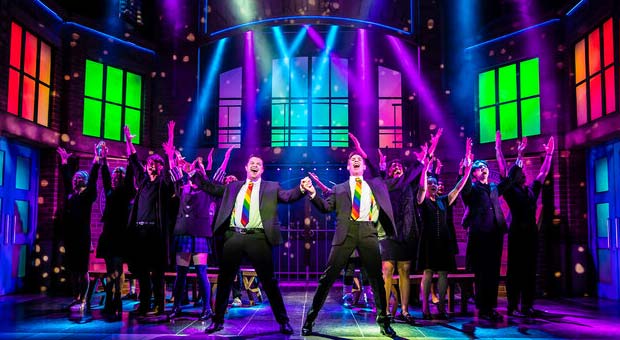 Having only seen the Heathers 1989 movie a few hours before seeing the show I really wasn’t sure what to expect, let alone whether I’d enjoy what I was about to see. Whilst the movie has become a cult classic my initial thoughts were ‘how the hell do you get a musical out of this!?’

The answer came in the form of a 2.5 hour show that delivered everything you could possibly want  out of a musical. For me the musical delivers what the film could not: coherent, modern and relevant story. The cast are magnificent, every single member of the cast put heart and soul into the performance.

In brief the story follows Veronica Sawyer (Rebecca Wickes), a high school outcast who becomes involved with the Heathers; the most popular and meanest girls in school led by Heather Chandler (Maddison Firth) in order to gain protection and popularity as Veronica navigates high school. During the course of this Veronica meets love interest JD (Simon Gordon) who has a damaged side which leads to murder.

I went into the show completely blind, I had no idea that popular songs like ‘Candy Store’ even came from this musical. ‘My dead gay son’ is an absolute standout; brilliant, touching and very, very funny. The audience were in hysterics and very much rightly so.

The cast were brilliant but if I were to pick a couple of standouts it would have to Maddison Firth as Heather Chandler. She embodies this deranged and spoilt teenager who is used to being in charge. A girl like her crosses cultural boundaries - we’ve all across a ‘Heather’ in some way shape or form.

If this review is gushing that’s because it is and it’s meant to be. This show is awesome. From staging and directing to the cast. I can’t help but mention the cast over and over because they really were brilliant.

As a member of press I got free tickets. I loved it so much I’m going on Friday. The show is only here until Saturday (9th October). I can’t recommend seeing this wonderful show highly enough.