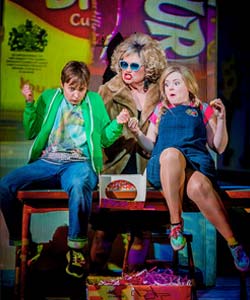 Hansel and Gretel at The Lowry

A somewhat bold move to mix a much loved opera with video design and technology, but the work of Ian Galloway within Opera North’s Hansel and Gretel brought fresh, dramatic and entertaining moments to the evening.

As the two leads Katie Bray (Hansel) and Fflur Wyn (Gretel) move around the stage focusing with a video camera, the audience are provided with close-ups on their facial expressions, depictions of their games and a smooth link into their journey into the forest. The video design brings moments of ‘Blair Witch’ fear combined with an accentuation of childhood, as the permanent glow from the camera lights the ‘children’s’ faces. Finally, as the camera focuses on the fridge, the gingerbread house reveals itself as a marvellous depiction of modern day ‘Happy Face’ packets and ‘carmamac’ wrappers.

Despite the technology being such a central concept, it does not overwhelm the musical performances. Bray and Wyn were faultless, bringing a childhood innocence to the story, a difficult task to achieve with such strong and sublime operatic voices. Susan Bullock was outstanding as she doubled up between Gertrud and the somewhat fashion conscious, domestic goddess witch; and as she grabs and hurls the black forest gateau across the stage, you really get the sense that this witch has definitely ‘been to Iceland’.

Christoher Altstaedt conducted the orchestra sublimely throughout and as the orchestra played through the beautiful lyrical motifs of the overture, they sounded like they were playing in the palm of his hands. Humperdinck’s musical score certainly is both rich and dark and Alstaedt perfectly understand this, replicating the sweetness seen on stage.

This is an opera not to miss, regardless of whether you have never experienced opera before, or you are a seasoned goer. Catch this gem before it goes, you will not be disappointed.

Hansel and Grete plays at the Lowry on Saturday 11th March 2pm. Details are here.