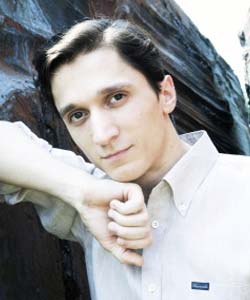 The Halle demonstrated its professional attention to detail throughout the programme and were conducted by Andrew Gourly.

Overture: Romeo and Juliet
This was Tchaiskovsky first major success and reflects a Russian fascination with Shakespeare. The piece revolves around the story telling the story in three parts the Friars piety, the eternal feud of the Captulets and Montagues and the ill fated love affair.

Rachmaninov - Piano Concerto no.2
Guest pianist - Alexander Romanovsky
Not often performed it was exhilarating to listen to. Alexander's interpretation brought the piece to life, making light of this difficult piece to play.

Later in an exclusive interview with Canal-St Alexander said that "he had only performed this piece once before and that there was only a very short time to rehearse with the Halle for the performance."

Alexander said "I have a real love for Rachmaninov . His work wil always stretch players, in particular I enjoying playing the Concerto no.3"

A remarkable feat considering that this is one of Rachmaninov 's most complex pieces. Alexander studied at the world famous Imola Piano Academy, from the age 4, based in Italy.

Alexander is a renowned pianist, born in the Ukraine, now lives in Italy and his next engagement is performing Mozat in Moscow, Playing with Vladmir Spivakov at the International Hall of Music.

Alexander has been on a short tour of the UK playing in Nottingham, Scotland and Manchester. Judging by the reception of the audience he will be returning to our shores soon.

Tchaikovsky - 1812 Overture
This piece, a celebration of the Russian defeat of Napoleon, is a real roof raising event for any orchestra. The battle between the Napoleonic forces (Woodwind) and the Russian forces (the Strings) is laid bare for all to hear!

Tchaikovsky even includes La Marseillaise as sign of the Napoleonic folly. The rousing cannons close this battle and are playing on a boom base drum.

Certainly just the thing to hear with Russian friends on a cold snowy night!