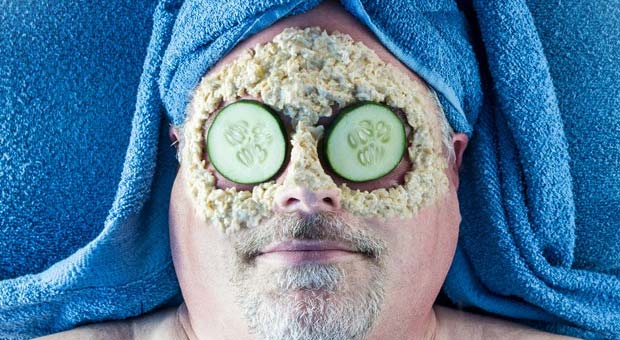 Gym & Tonic is having a two night run at the Oldham Coliseum. It was first performed in 2004 but John Godber has reworked the play he wrote and developed the subject matter more.

It’s a comedy with some serious moments, in which a cast of four play seven characters. The setting is a health farm where Don (Peter McMillan) and his wife Shirley (Stephanie Hackett) have booked themselves in for a week. We also meet Keith (Robert Angell) a frequent stayer, and Gertrude (Jacqueline Naylor) a delightfully eccentric old lady, who is also a frequent stayer and who has a rather bleak outlook on life.

It’s evident that Don and Shirley’s marriage has hit a bit of a brick wall. Gertrude views life as a “Turd Sandwich”, whilst Keith is more the healthy outgoing type. Don and Shirley can’t really afford their stay but are determined to extract the most they can from it and avail themselves of all the treatments and activities on offer. Keith semi-befriends Don and Shirley and it’s here where their disappointment with each other comes out. Although we laughed a lot at their situation we also couldn’t help feeling a bit sorry for them. Don is on the edge of depression and Shirley is frustrated, and all the pampering in the world can’t fix things.

There are some very funny moments, most notably the massage scenes, and all characters are well played, with top marks going to Jacqueline Naylor for her portrayal of Gertrude – although that’s not to diminish the others’ performances.

Gym & Tonic’s final night at the Coliseum is Wednesday October 2nd, but it is on tour until mid-November.