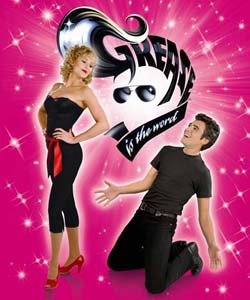 Grease, Palace Theatre, Manchester, Monday 8 October 2012
Grease really was the word on Monday night with your Canal Street Correspondent transported back to 1950’s America and Rydell High in the company of the touring cast of Grease under David Gilmore’s direction.
The storyline is well known if a little predictable.
Familiar characters strut their way through iconic songs including “Summer Nights”  “Greased Lightnin” and “You’re the one that I want” -  always crowd pleasers mixed with poignant ballads “Hopelessly devoted to you” and “Sandy”.
The show opens with the Musical Director (Barney Ashworth) warming the audience up inviting them to wave their arms, cheer, and clap along to the tunes.  The band under his direction is exceptional.   By the end of the overture and the opening number “Grease is the word”, the audience are ready to be enthralled and entertained.
The ensemble look and sound great, the lively young cast provide two hours of slick, entertaining spectacle and vibrant dance,
choreographed by Arlene Phillips formerly of “Strictly” fame.
All of the principal characters are instantly recognisable from the film.  Danny, television’s “Grease is the Word winner” Danny Bayne, and Sandy (Carina Gillespie) take centre stage as the plot develops as they recall their (very differing), versions of what happened on those “Summer nights”. Both sing well and can definitely move.  They look great.  Sometimes however the characters become cartoon parody of the characters of Travolta and Newton John who made the roles famous in the film.
Sound support is provided by most of the other principals.  From the T-Birds, Richard Vincent and Ross William Wild are particularly entertaining as Doody and Kenickie respectively.  Darren John hams it up as geeky “Eugene”.  Stuart Reid tries hard as Vince Fontaine, but on occasions his voice lacked power and crispness.
From the pink ladies, Lauren Stroud provides a sound performance as by Pink-haired “Frenchy”.
At this performance “Rizzo” played by understudy Olivia Fines needs to work on the delivery of her big number “There are worse things I could do”.  Her singing in this number was strained and more than once distinctly out of tune.  This detracted from the performance which as a consequence lacked the necessary poignancy.

And it is CAMP my canal street cronies – the semi naked first act shower action, with choreographed shower and loofer action made this camp old queen; guaranteed to bring a smile to even the harshest Canal Street critic!
And on the subject of CAMP ATTACK, Russell Grant makes a second act appearance as “Teen Angel”.
He camps it up something chronic and attacks the part with gusto; delivering a razzmatazz version of “Beauty school dropout”.  It was clear that by the end of his number Grant had given his all, and clearly he is exhausted.  He does not have the strongest of singing voices, but what he lacked in voice he certainly made up for in entertainment.
Terry Parsons’ set is excellent – both simplicity itself but with attention to fine detail - and Mark Henderson’s lighting clever while pyrotechnics and devices add great pizzazz – how do they switch the beaten up side of the car to glittering bling?
A crowd-pleaser with a mixed but enthusiastic audience clapping and tapping their feet throughout, this show delivered the feel -good factor.