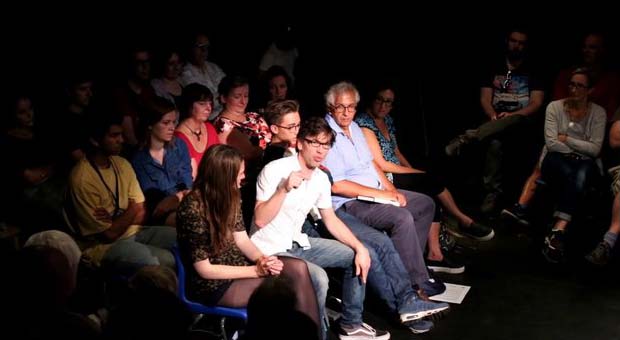 Going Viral, written and performed by Daniel Bye, is a performance lecture with a classic storytelling format that won a Fringe First award in 2015. In it, Bye explores the world's least favourite yet most discussed topic of this year - a virus pandemic. Don’t give up on it just yet! It may be unnervingly relatable, but I highly recommend giving it a chance.

Bye starts his 70-minute monologue by sitting in the audience, talking casually and confidently and sharing hand sanitizer around the room, a simple yet effective way to set the tone and put the audience at ease. He then begins, faux-documentary style, the story of an unnamed man, spoken of in second-person to help us connect more with this anonymous character and his actions. The man flies from Kampala to Heathrow; on the flight, something incredible happens: everyone on the plane is suddenly stricken with an uncontrollable case of weeping. Everyone except for our protagonist - unbeknownst to him, he is what is known as a ‘super-spreader’.

The weeping continues once the flight lands, and this strange affliction spreads. It even proves lethal, when a man blinded by tears walks into oncoming traffic. The government insists that this is simply mass hysteria, nothing to worry about. They even launch an advertising campaign to discourage the public from exposing themselves to too much empathy - an apt metaphor, don't you think? An Indian scientist, our secondary protagonist, seems to be the only person who understands the gravity of the situation, and so takes it upon herself to trace the whereabouts of the ‘super-spreader’.

In the meantime the man wanders the world, infecting everyone he comes into contact with while becoming increasingly despondent as he feels more and more isolated as a ‘non-weeper’. He even tries different methods for inducing tears, like chopping onions and getting an audience member to pluck the hairs from his arm with a pair of tweezers. This engaging if sometimes overly complex narrative is intercut with fun segments which teach us about viruses, from a pop quiz on the R0 rate of some of the most famous viruses, to a practical demonstration of how they infiltrate our immune systems using Liquorice Allsorts.

Underlying themes of political hubris and emotional austerity, as well as links to ‘going viral’ in the digital sense, make the piece both more relatable and more well-rounded, with the moral being that paranoia and self-interest can be as deadly as any virus. However, perhaps too much going on at times and a lack of resolution makes the piece feel slightly underdeveloped.

Although devised in response to the Ebola epidemic, which seems like a distant memory today, the relevance of this piece in the shadow of the current crisis makes it a must-watch - it is extremely informative while also being entertaining; you will learn everything you need to know about viruses, yet Bye’s conversational tone, rich visual descriptions and humorously idiosyncratic story act as antivirals against that macabre feeling one usually gets when contemplating one’s own mortality, or when watching the news.