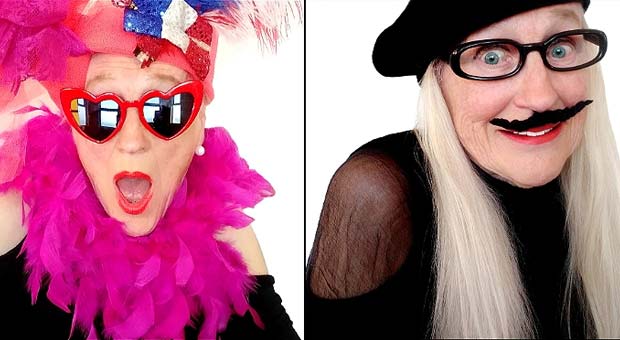 Girls Who Wear Glasses was a zany performance at the King’s Arms in Salford on the second day of Manchester Fringe festival. The title comes from a Dorothy Parker throw away couplet “Boys don’t make passes at girls who wear glasses”. Well more fool them, and Patricia Hartshorne (PH on stage) demolishes that with aplomb as everyone who featured in the show wore glasses at some stage.

PH – who I would say is about pH7 and thus neutral on the scale of acidity – is the sole artiste (if that word is still allowable in our progressive times), who stresses via her various alter egos that inclusivity is a given. I whole-heartedly agree but perhaps she will forgive me – given that this is a one woman show – if my gender recognition needs a bit of adjustment. Here goes…

Patricia adopts several characters in the sadly short 60 minutes allowed, and manages to run the gamut of a whole spectrum of women from the past – ranging from Eva Braun through Marlene Dietrich to Carmen Miranda – and she captures them all well.

As a short introduction we were treated to an adaptation of Gilbert & Sullivan’s “Modern Major General” that coped with the traumas of the menopause. A quick change (of glasses and head gear) later and she was Carmen Miranda (complete with the tutti-frutti hat). After this she became a nun, extolling the way that the convent had been brought into modern times (and with a perfect Irish accent).

At various points in the proceedings, a telephone was produced from an ample cleavage. The calls were variously from an agent, Boris Johnson, an admirer who was keen to meet her round the back of the recycling bins just off Tesco on Quay Street, and the kitchen down below. It was all in the best possible taste.

The final personification took us into the final days of Hitler’s bunker. That was a slightly tricky time, where she almost lost us, but when you’re that far down the only way is back up.

Unfortunately this was a one off event, but I’m sure PH will appear again soon. I hope so anyway – as the old joke has it “She was only the optician’s daughter, but given two glasses she made a spectacle of herself”. Bravo – and full marks to recognising Salford as a city in its own right.