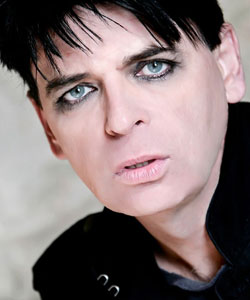 Now over 40 years on, Gary made a rare appearance at Manchester Academy last weekend and we were there to reminisce.

Having arrived early and availed ourselves of some drinks, myself and my guest excitedly awaited Gary's arrival on stage, however we had to be slightly patient. Special mention must go to the superb support band 'Outfit' a five piece with a really eclectic sound, the singer dressed like Jimmy Krankie but had a voice that was somehow straight out of the 80s, powerful but feminine, somewhere in between Holly Johnson, Danny Wilson, Prefab Sprout and OMD.

For a support act playing to a packed and impatient room they won over a large proportion of them. I'll be searching out their music and buying it.

After a long wait and a huge build up of smoke, light show and a wall of sound, Gary Numan made his entrance to an audience in raptures. With almost no breaks in between songs we flew through the set list, an unmistakable sound, synth, heavy guitars, distinctive vocals, the result was almost overwhelming.

'Cars' was also a highlight, with the venue packed to the rafters with middle aged men in dressed black, who, it appears,had borrowed their wives eyeliner for the night.

By the time he got to 'Are Friends Electric' it felt like I religious experience. He could have shuttled his audience onto buses to start a new world underground and we'd have all gone with him.