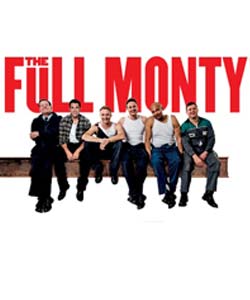 There was a more than expectant crowd in the Opera House this week as the Full Monty returned to Manchester. We’ve all seen the film showing the story of a bunch of unemployed steelworkers doing their best in Thatcher’s ravaged Britain. It is heart-warming but let’s face it, the females in the audience, and believe me it was primarily female with a few sheepish men staring at each other asking what they were doing there, were in the mood for that Hot Stuff.

There were a few technical glitches which got the night off to a bumpy start. A very brave producer came out to the baying mob to announce that the show was going to be delayed due to a power surge which was greeted by a light hearted whoop. However the show must go on and it certainly did with Gary Lucy bounding onto the stage in the title role of Gaz, the feckless father of Nathan, who needs to raise money to pay his ex and keep access to his son.

In the spirit of all good stories he assembles a band of heroes to help him achieve this in the guise of his best mate Dave (Kai Owen), hapless security guard Lomper (Anthony Lewis), lovable snob Gerald (Andrew Dunn), soulful Horse (Louis Emerick) and out and proud Guy (Chris Fountain).

Whilst the show stays true to the film’s roots with all the famous scenes in there, including the iconic scene in the DSS which the crowd almost cheered the roof off for, there are few new additions including a beautifully touching scene between Lomper and Guy.

As a team they work brilliantly along with the rest of the cast, most notably Charlotte Powell as Mandy and the wonderful Fiona Skinner who plays Dave’s long suffering and incredibly frustrated wife Jean.

Some of the cast are old hands at this, particularly Gary Lucy who has achieved the unenviable task of making a character his own who was portrayed to perfection by Robert Carlyle all those years ago. He has most definitely done this and a true leader of this pack. Chris Fountain is a relative newcomer to the cast but his comic timing as happy go lucky Guy is brilliant, especially with the surprise he has for audiences just before the interval.

However the stand out performance for me goes to the newcomer, Anthony Lewis, who plays troubled Lomper with absolute grace and dignity to the point where you could almost wish for a spin off to see what happens to the character next.

As the show wound up to it’s crescendo, it has to be said that the women around me were at fever pitch and I can only imagine how scary it is for our would be strippers walking out night after night to the screaming crowd as they bring the house down with You Can Leave Your Hat On. The lighting team were kind to them this night and their dignity remained intact but they still got a standing ovation which is well deserved for this feel good show.