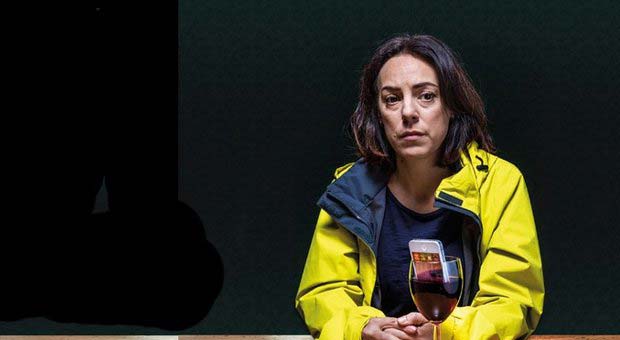 A new production of Four Minutes Twelve Seconds was on at Oldham Coliseum on February 25th. Written by James Fritz, it’s been updated to be set in Oldham rather than its original Croydon. This certainly makes it a bit more topical, though whether his idea that Oldham is to Manchester what Croydon is to London is open to question. The play concerns itself with posting an inappropriate film clip onto social media, how it came to be uploaded, and the subsequent semi-nuclear fallout for all parties involved.

There are four cast members. David and Di (Lee Toomes and Jo Mousley) are parents to Jack – who we never see. The others are Cara (Alyce Liburd) Jack’s girlfriend and Nick (Noah Olaoye) Jack’s schoolmate.

The play opens with Di asking David why there is blood on Jack’s shirt. The subsequent questions and answers, where Di keeps digging but David keeps prevaricating, continue until we find that Jack’s been beaten up by Cara’s family as a matter of honour.

More digging ensues, and it eventually comes out that Cara has dumped Jack because an explicit video of them both has gone viral at school. David tries to defend Jack’s behaviour as merely sowing a few wild oats, but Di is at her wits’ end – fearing for Jack’s safety and his future. The burning question remains unanswered though: how did the video come to be uploaded in the first place? Jack denies doing it, so who did?

It would spoil things to answer that question, but the remainder of the play is about coping with the aftermath until the truth finally emerges. It does this very well indeed, and difficult questions and shifting moral stances have to be answered and taken along the way – including watching the video. At the end shattered lives have to continue, but how?

There are strong performances from Jo and Alyce, where the anger is well expressed and channelled. Noah (“Thick Nick” as he’s known) comes across well too, as he tries to steer a middle course. Lee starts out a bit wooden but comes to life as the play progresses, for reasons that will become apparent on seeing it. The sound effects were a bit overdone but lighting was used to good effect to break things up.

I found the laughter from a lot of the audience a bit hard to understand. The play isn’t a comedy in any sense and it seemed very odd to hear them laughing at the torment Di and David were going through. Perhaps they didn’t realise that the internet is a bit like an elephant – it never forgets. Once something is posted, however innocuous it might be and even if it’s only fleetingly, the chances are that someone will have copied it, or forwarded it on. That’s the whole point of social media: instant attention. The comparison with a virus is perfect as it’s impossible to predict when another outbreak will occur. Unlike a true virus though – which can be eliminated with a huge effort – there is always a chance that the post will be uncovered and go viral again.