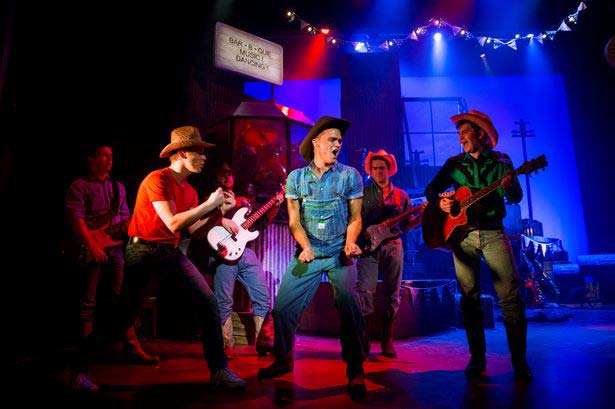 Welcome to a teenager’s nightmare, a close-knit Oklahoma town in which dancing is banned.

You can believe city boy Ren’s (Joshua Hawkins) dismay when he and his mother Ethel (Geri Allen) first arrive in town and he finds out that existence in Bomont is worse than he feared; being a teen in the 80s and being forbidden to dance – it’s a real-life nightmare.

Reverend Moore (Darren Day) has banned dancing, following his own son's tragedy that he simply can't get past, which in the end influences the rest of the town. Of course, this rule doesn’t stand for long once the younger people of the town start to rebel and set on their task to restore happiness again into the town and into everyone’s lives.

To top it of boy meets girl, Ren meets Reverend Moore’s daughter Ariel (Lucy Munden), and the show smoothly brings us along as he falls in love.

What’s an 80s film without a teenage love!

Throughout the show I found myself singing my heart out for the whole theatre to hear. The music was fantastic, with well known throw-back hits of the 80s.

The performance is so electric and engaging that you feel like you're onstage along with the cast.

The cast are masters of showmanship from singing to dancing and even playing their own musical instruments from woodwind to strings and everything inbetween.

Willard (Jack Quickenden) absolutely stole the show in parts with his astounding dance moves and amazing physique got all the whoops and cheers. Rusty (Oonagh Cox), Willards soon to be girlfriend, who honestly harmonised her way into the audience’s hearts.

From the nostalgic clothes to the experimental hair, Footloose is a must-see adventure back to the 80s.

Footloose is on the Opera House until Saturday, 5th March.