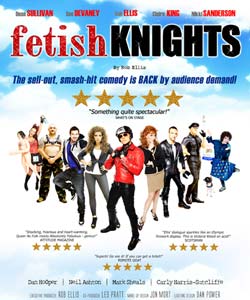 Fetish Knights continued its 'journey' from read- through  to  Fringe performance, then onto Studio run and finally last night in the much bigger Quays Theatre at Salford Quays. Fair play to The Lowry for programming this evolving piece, which is written by local man Rob Ellis. Judging by the audience reaction, performance at this venue is totally justified.

Most of the action takes place in ASSOCIATES BAR, away from the bright lights of the broader Manchester Gay scene. We are introduced to several characters whose worlds are inter- inked and who share history together. The central character of the drug dependant and vain Sean binds most of the fellow (men only) bar customers.  Also, there are four female characters, one of which is Sean’s mother, ably played by former’ Emmerdale Diva’, Claire King.

The script, it has to be said is full of sharp, witty one-liners. The 'very gay' audience demonstrated that they were 'in the know' on many of them. A number of references were made to well known village venues and to some of the high profile individuals who have graced them. All were greeted with the appropriate reaction.

Sue Devaney showed her superior stagecraft with a ‘Julie Walteresque’ performance as The Village long-time regular, Janice Spendlove. Notable too was the performance of Bernard Latham as the 'war weary old queen’, Kenneth Cadbury-Love. Bernard stepped in to the role with only a weeks notice, following the sudden illness of original cast member Dean Sullivan.

My personal highlight was the film sequence of Sean close to end of the play. The reason for it; well you will have to see the show to, understand why. You don’t have to be gay to enjoy this show but it certainly helps.