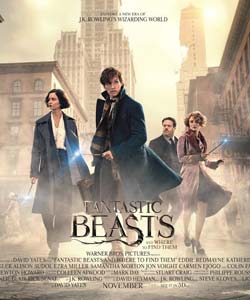 Fantastic beasts and where to find them

Fantastic Beasts and Where to Find Them: Spoiler Free Review.

It has been 5 years since the last Harry Potter film and for many fans who have grew up with 10 years of films and 19 years since the book was published the magic never goes away. With so much expectation and a film that is sure to be a box office hit Fantastic Beast and Where To Find Them has its work cut out for it but I can definitely say that this film does not let that get on top of itself and in some ways is better than the Harry Potter films. It truly manages the dark elements and the humour to give us a balance and impressive story with great performances by Eddie Redmayne as Newt Scamander and Dan Fogler as the lovable Jacob Kowalski.

Newt arrives in New York with a box bigger on the inside full of magical creatures but one thing I can certainly say is there is no boxing in J K Rowling’s imagination. To see the magical world outside the confides of Hogwarts is welcome and truly demonstrates what an incredible and rich world that she has created.

We enter a part of the universe that fans have not yet explored, for the most part fans are familiar with Hogwarts and to a degree elements of the British wizarding world. Fantastic Beasts and Where to Find Them is a first as none of the books contain the plot of this story but there is plenty of references to the universe we have come to love. This film does not need the input of Harry, Ron and Hermione for audiences to relate to the rich and beautiful characters that are brought to life in this film.

One of the first things I must say about the film is that it is beautiful. Whether it be 1930’s New York coming to life, the world inside Newt’s suitcase or those fantastic creatures themselves. The designs behind them make you believe in them, the care extends to the characters themselves and their interactions with them. Jacob gets drawn into Newt’s weird and wonderful world and is brilliant as not only comic relief but also has great chemistry with all the other characters on screen. In essence, Jacob is the audience; he has no understanding of the magical world but fully embraces it.

Despite being set in the 1930’s this film could not be more timely and speaks to exactly what is going on in our world today. The most obvious is how the film deals with the idea of difference, isolation and strangers. When Newt arrives in New York he is straight away viewed with suspicion and his creatures are viewed with fear, not just by the non-magical world but the wizarding community which he is a part of. With one of the nastiest presidential campaigns having been on going during this films production how much in tune with the real world could this film be. Newt speaks about the American Magical World not allowing relationships between witches, wizards and non-magical folks. That could not be more accurate a representation of the politics of the time.  J K Rowling has a long history of speaking out about inequality and it could not be clearer that is her first foray into screenwriting her politics and beliefs shine through.

Without giving away spoilers the film strengthens and builds on Harry Potter lore that was missed in the original films. Without being in the film the relevance of Albus Dumbledore cannot be ignored. If there are to be sequels to this film I would hope that the ground work laid out in this film is continued to be built upon as previous Potter films missed out on some great material in this regard and this film makes a strong start on bringing that element to life.

Once again fans across the world will be able to embrace J K Rowling’s fantastic world on screen, In honesty I did not know what to expect when I heard about this film but of course J K Rowling was never going to let down her legions of fans.