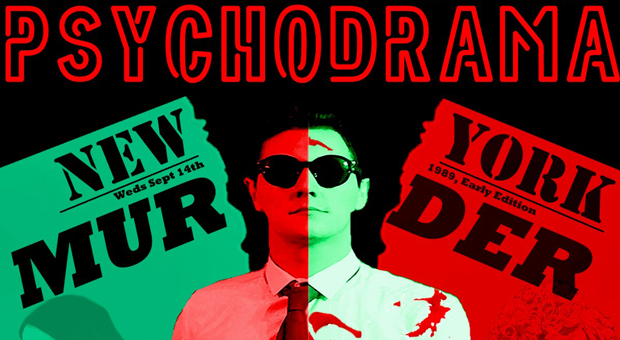 The 1980s. Big Hair. Big shoulderpads. Rara skirts. New Wave. Hip Hop. And the decade where everything changed in the media. Suddenly it wasn't enough just to report the news but to create the entire atmosphere involved with the news. By 1989 the world was on the brink of new decade and all the changes that the 90s would bring, and into this new obsession with the media and fame comes Benjamin Davenport II.

Benjamin Davenport Senior had been a big name in the New York newspaper world, now his son and heir is out to make an even bigger name for himself in the field of journalism, despite never having worked on a newspaper before. But Benjamin's drive for success leads him to bend the rules for his own benefit. But what starts out as him creating stories for the success of the lead byline turns more sinister when the news available isn't what he wants to write about.

Richard Allen as Benjamin Davenport II is a tour de force performance. Rarely off stage he makes the ruthless, selfish and arrogant Davenport a huge presence on a tiny stage. Whether screwing his mistress or screwing over his work colleagues, Allen's controlled yet fervent portrayal is the star of the show.

Emma Morgan convincingly plays the tough yet vulnerable Editor in Chief Andrea, who is also trying to live up to her father's legacy. Desperate to retain her position she turns a blind eye to the early signs of Benjamin's lies. While Anna Hickling as Davenport's girlfriend Brenda gives a stunning depiction of a woman driven to the brink. The rest of the cast Joe Slack, Brennan Campbell, Maya Szlachetko, Benjamin Gray, Jenny Owen and Tricia Sammy Rose all contribute in no small way to the overall success of the play.

Writer/Director Craig Hepworth is one of the best writers and directors on the Manchester Fringe scene and Fake News is as well written and directed as his other work. He and tech wizard Karl Burge have created an 80s vibe with neon lights and video screens. These were the days when neon was fashionable and video games were taking off with Nintendo having the majority of the console market in 1989.

Fake News is sometimes humorous, sometimes disturbing but always entertaining and as Benjamin Davenport II himself says in the play the audience need entertainment from their media, this play gives it in spades. Grab a ticket if you can.