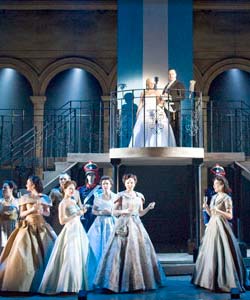 Evita at The Lowry

On Tuesday evening your Canal Street Correspondent was transported to the hot and sweaty streets of Buenos Aires,  as Evita hit the stage at the Lowry.  The musical from Andrew Lloyd Webber and lyrics by Tim Rice, tells the life story of Argentine political leader Eva Perón wife of former Argentine dictator Juan Peron, from her young and ambitious beginnings to the enormous wealth and power she gained and her ultimate rise to sainthood.

The musical began as a rock opera concept album released in 1976. Its success led to productions in London's West End in 1978, winning the Laurence Olivier Award for Best Musical, and on Broadway a year later, where it was the first British musical to receive the Tony Award for Best Musical. Its ballads are beautiful, its lyrics emotive and its book is clever. And here, after thirty years, Evita continues to reign almost unquestionably with beauty and with grace.

This revival Bill Kenwright production is crisp and well-staged.  Madelina Alberto sparkles in the role of Eva , vocally commanding and emotionally rich.  The moment when she appears on the balcony, lit like a saint, is as enchanting as it is spectacular, a perfect entrance to a perfect "Don't Cry for Me Argentina."

Fine performances also from Mark Heenehan as Peron and Sarah McNicholas playing the Mistress, whose rendition of “Another Suitcase in Another Hall” was captivating.  The Ensemble was tight and the staging clever and appropriate.

An otherwise excellent production was however let down by Mari Pellow as Che.  Though he looks the part, Pellow's performance as the narrator was “Wet….Wet…..Wet….” At times inaudible, at all times wooden, Pellow simply does not have the presence or the vocal range to pull-off this role.

Nevertheless, a whirlwind of a show and recommended to readers.

Full details and to book here.