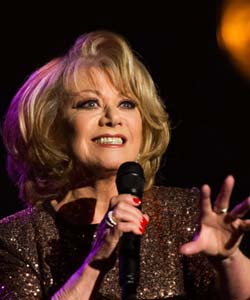 The evening was filled with her most successful, and some not so, credits in the musical theatre genre, as well as a bracket of jazz standards and highlights from her new album Elaine Paige and friends - which, if audience members weren't aware of it's upcoming release, were well and truly aware after Paige relentlessly promoted it throughout the entire night.

Paige delighted her adoring crowd with excerpts from Evita, the now 30 year old Chess - the musical which Paige took great delight in divulging to the audience was written specifically for, from which she performed a rousing duet of "Nobody's Side" and a simple, touching solo arrangement of "I know him so well".

Fittingly, this grand diva of the stage is most at home portraying the grand diva of the silver screen, re-creating her favourite pieces from Lloyd Webber's Sunset Boulevard, the show which first landed her a gig on Broadway. The closing number of Act One "As if we never said goodbye" sees Paige completely in her element, giving a detailed and enthralling performance of this anthem.

In full "Norma Desmond" costume and make up, this is by far her standout performance of the night. "With one look" as the second encore of the evening is also excellent.

Ms Paige also demonstrated great confidence by sharing here stage with the rising star Icelander Gardar Thor Cortes.This tall and very handsome tenor'often described as the James Bond of classical music,wowed the audience with his tremendous stage presence and stunning voice.His version of the Abba written Anthem,was the second finest version i have ever heard anywhere.The first?Tommy Korberg in the original cast.

It was apparent that Paige happened to take the diva characteristics of Desmond a little too literally, displaying some extremely 'diva-esque' antics throughout the night.But then she's allowed..

There were also great use of visual technique with a series of images and photographs across the huge backdrop,all of which reminded us of the breadth of a career which has included meeting and working with, some of the most famous people on the planet.Some lovely family photographs were also included.

Perhaps the most anticipated numbers of the night, including the ever popular "Memory" from Cats still showed immense conviction and connection to the text.

Sartorially,Elaine was beautifully dressed throughout,in a number of stunning dresses which inevitably gave cause for discussion during and after the performance.

High praise too a marvellous group of talented musicians, aswell as the superb Bridgewater Hall, which as ever showed its versatility as a premier concert venue.

So on an evening filled with great talent,several anniversaries(her radio show is 10 years old) there was clearly just one star.MS Elaine Paige.