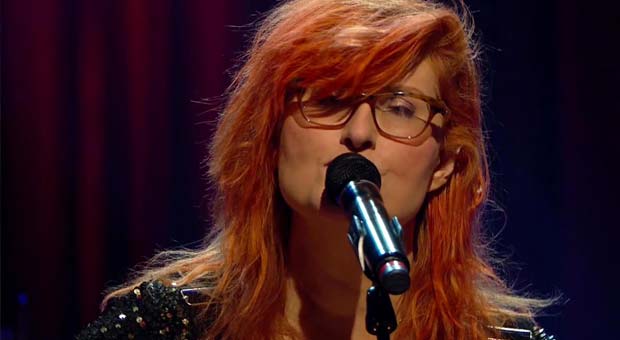 Eddi Reader performed on Wednesday 19th June at the Stoller Hall in Manchester, ably supported by an ensemble who also backed her in most of the songs, and for a couple of numbers the supporting artist (Siobham Miller) made a welcome return to the stage to accompany her.

Her delivery ran the gamut of emotions. At times we were laughing out loud at her anecdotes, at another we listened tearfully as she delivered My Favourite Dress – where an old lady in a home for the bewildered reminisces about her life. Robert Burns’s poem My Love is Like a Red, Red Rose was sung with depth; Maid of the Loch* had us imagining ourselves on board the ship that used to traverse Loch Lomond – it’s now a rusting heap; during Pangur Bán and the Primrose Lass we were tapping our feet; Old Song made the telling point that there’s nothing like a piece of music  for transporting you back in time; Dragonflies told us that life passes too quickly and we should make the most of it.

A lot of the songs came from her new album, Cavalier, but older numbers made an appearance too. We had It’s Got to be Perfect, still as great now as it was then. Patience of Angels was sung by the ensemble. As a request from the audience we heard Allelujah.

Eddi delivers. She can croon, swing, jazz things up, sing a cappella and more. She plays guitar (and bandoneón we found). She can dance, and she can still hit the high notes. From her walking on stage to leaving it 90 minutes later we had a fantastic evening. If you can grab a ticket for future dates on the tour (http://eddireader.co.uk/gigs/), do so.

* There is an appeal to restore the Maid of the Loch. See https://www.maidoftheloch.org/