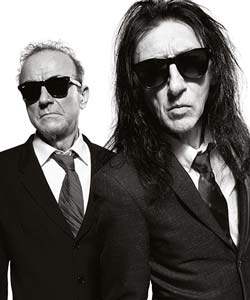 This was a gig to promote the new release of Dr John Cooper Clarke and founding member of The Stranglers Hugh Cornwell’s debut new album This Time It’s Personal. A collection which features ten hand-picked songs reflecting the pair's shared love of classic American and British pop they grew up with

With two hugely influential figures on stage together, both knocking on in years perhaps they've earned the right to be a little self-indulgent. Unfortunately that's exactly what this gig was.

Two songs in Clarke mused “This is the second song we’re going to sing written by a murderer”. They then went on to murder every song themselves.

Clarke on lead vocals (for the first time at 67) didn't have the voice to do justice to the songs they'd picked. I wouldn't expect him to turn into Celine Deon but when he sang MacArthur Park people were looking around and wincing.

Clarke and Cornwall didn't really come into their own until the encore with the songs 'I Wanna be Yours' and 'No More Heroes'. There were a good amount of happy people po-going down the front with a sea of bald heads behind them holding their phones aloft. It's just a shame they had to wait til the end for any real piz-azz. From about 9.10pm there was a steady stream of people heading to the door who had perhaps come expecting poetry. Or a band that sounded like something more than a pub covers band.

Support band Larkins were beautifully full of beans and won over a difficult older crowd whilst Mike Garry had the man stood next to me in tears over his mother who he told me had died 30 years ago. With his ode to Tony Wilson ‘St Anthony’ and ‘God is a Manc’ he couldn’t fail to win over this crowd.