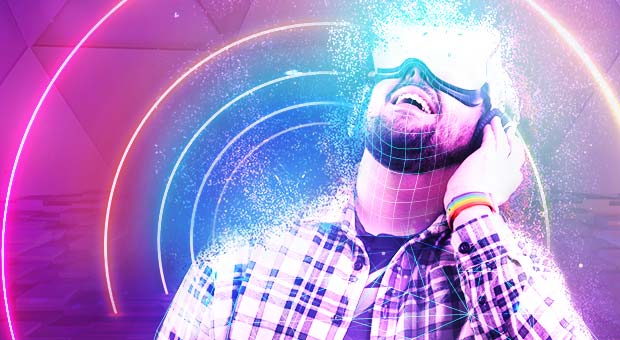 Navigating the real world is problematic at best, there are work pressures, family pressures, and our own internalised lack of approval of how we look. Now take that into virtual reality and it multiplies or it doesn't. This is the world that Double Life VR takes you to. Double Life VR is a near-future gay dating experience that replaces Grinder with Vinder, the VR version with all insecurities and stresses of modern life.

I found myself in basement, of Whitworth Locke Manchester in front of a small lighted stage, with a familiar laptop teleporting me into the bedroom office of a young creative. At this point the narrator explains what will happen and that there may be some technological issues as the VR theatre is in baby stage. Note all VR headsets and headphones are spotless and sanitised.

Guy, played by Craig Hunter, is welcome onto the stage after a long day working as a graphic designer. Guys work life is as a creator of images of beautiful people to sell headphones of all things. Guy's negative relationship with his body comes to light, adding as well the pressure from Guy's family to find a partner. But Guy has his favourite thing is, his VR headset that allows Guy to exit the real world.

We accompanied Guy in VR which is very interesting experience also little disturbing to see the vanity of some people and internalised negativity. When you enter VR, Guy and the Narrator come out of character, to program your headset so you don't have to worry about the technology, and the VR sessions are designed to develop your skills.

The show continues with more VR sessions, the story of Guy's life and dating in VR until near the end where Guy's worlds collide, when a virtual dating on Vrinder becomes a reality.

The fusion between traditional theatre and virtual reality is incredible, with a story set in the future but very clear to anyone who accesses the dating via an app or online.

It’s a must see during GM Fringe, and with their use of space and staging that will teleport you into Guy’s world.