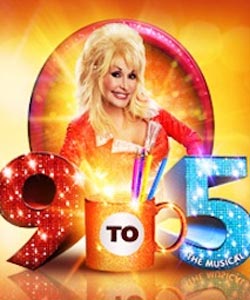 I have never seen the film and so I was not sure what to expect. However, I did know that with Dolly Parton's involvement there would be a strong element of fun!

The show started off with the familiar sound of the classic 9 to 5 and included a personalised welcome from Dolly herself projected from a big clock hanging over the stage. Dolly introduced the 3 main characters and gave a brief summary of each of them, setting the scene perfectly. The staging and costumes were excellent setting the scene of a 1970's office environment.

Natalie Casey who played Judy Bernley was a big surprise, putting in an incredible performance in one of the staring roles. Her voice and acting skills were impeccable and along with a certain Ms. Langford, stole the show.

Amy Lennox who played Doralee Rhodes (Dolly herself) did her character justice with a convincing portrayal, although not, in my opinion, as show stopping as the pair mentioned earlier. Bonnie Langford (Roz Keith) was the real highlight of the night, getting the most laughs with her comedy performance and cheers for her excellent rendition in her underwear. She showed off a pair of perfect pins that someone half her age would of been proud of.

The show ended with a great crescendo as Violet Newstead got her well-deserved promotion and the ensemble put in a great display of song and dance. To finish things off, we couldn't leave without another personalised message from Dolly thanking the  Manchester audience, for attending. This led to everyone getting on their feet singing and dancing to... yes, you can guess, 9 to 5.

It was a thoroughly enjoyable and entertaining production that I would see again and absolutely recommend.

For full details of the run, Please click here