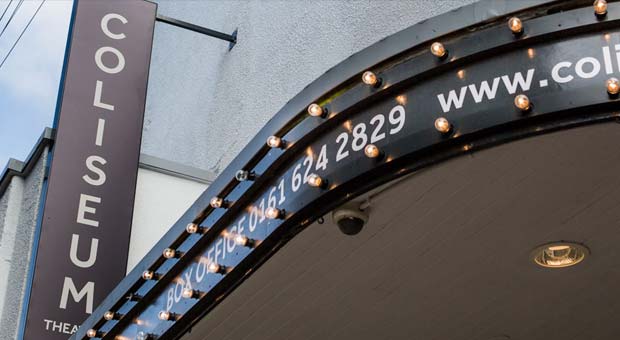 Dare to Know Theatre – which I think takes its name from a rather rough translation of “Sapere Aude”, the motto of Oldham’s coat of arms – put on an evening of short playlets at Oldham Coliseum on Thursday 21st July. In all there were 7 main events, with a running selection of scenes from a forthcoming community play between them. It was a slightly confusing format for the first few minutes but we settled in to things after that.

The major pieces touched on a variety of topics that brought up the darker side of just getting by, some of them more forcefully than others.

In 413 Liverpool Street Libby tells her story of falling in love, then out of it, and the eventual grisly dispatching of her boyfriend whilst he slept.

The Train starts out as a seemingly ordinary girls’ birthday outing but tensions soon appear, and not just about sexuality (one of them is lesbian).

In See it, Say, Sorted, Jas Nisic narrates the frustration of trying to report an incident in an almost empty tube carriage when a man starts pleasuring himself in front of her.

Passing Time was, for me, the best of the evening. Nick Maynard plays a drag queen in her declining years where she’s looking back on what might have been but now it’s all a bit too late. It brought a lump to the throat.

Make-Up is set in a police station (I think) where two women who used to be on better terms find themselves there as their daughters have repeated their mothers’ history and gone shoplifting together. The twist here is how one got away with it and the other one didn’t.

One Day I’ll Be Famous (almost) closed the evening. It’s a light-hearted meeting of several elderly actors living on memories and generally bitching each other until a new and much younger one arrives. All good fun.

There was one other piece, Making a Myth, in which two people are in a clinic to have their appearances updated. I simply didn’t get this one.

The glue, if that’s the term, that held things together between all of the above was a set of excerpts from Leap of Faith, which will be presented on October 4th. It has a large cast and explores why people choose to stay in Oldham or leave it. At the very end, all of the bits we saw and heard were joined together to form a more coherent whole with a soliloquy on why people choose the latter. Special mention must go to the two gossiping women who could have modelled their roles on Sissie and Ada.

Full marks go to Jack and Miranda at Dare to Know Theatre for nurturing talent, and to the Oldham Coliseum for their Cultivate Festival.

Put October 4th in your diary.