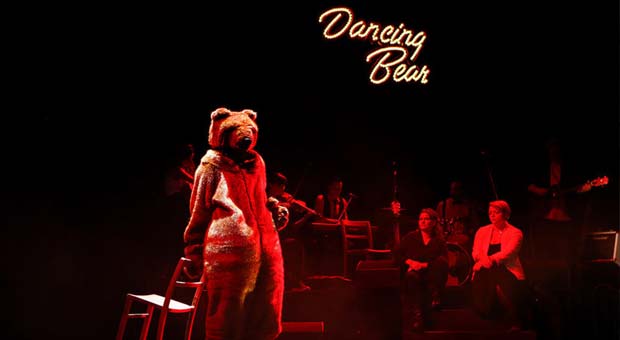 Dancing Bear at the Palace Theatre

"If we go back a while, the Palace Theatre was known as the Palace of Varieties. Sadly, “Variety” has had its day, but last night’s performance of Dancing Bear perhaps shows us that it’s not completely dead. Everyone in the cast was multi-talented and could dance, sing and play an instrument – and some could play more than one. Everyone had a story to tell and the musical numbers were good. Full marks.

Dancing Bear’s subject matter was billed as breaking free from the shackles of fundamentalist faith and finding one’s own true self. In the performance the only faith that was mentioned was Christianity, and the Bible came in for some severe bashing. Poor old God. Other faiths didn’t get a mention, perhaps because even mentioning Islam, let alone subjecting it to the same treatment, would be just too provocative - but I imagine the issues are the same. The passage from the Song of Songs shows that it wasn’t all bad news back then though.

The performance itself was a sort of “Church of the Poison Mind” meets “Hedwig and the Angry Inch”. At times people just burst into song, (a bit like they used to in Pennies from Heaven). At other times, things flowed rather better. Punctuating the performance was the eponymous Dancing Bear, who, by slow degrees, became more and more outcast from his original environment, whilst simultaneously morphing into human form and being welcomed into his new world by the rest of the troupe. I think this was supposed to be a metaphor for the outcast to acceptance that the performance was all about, but who knows?

The final scene had one of the cast, Owen the drag queen, brutally attacked, stripped, and violated – which makes you wonder just what was going through his assailants’ minds – before being tenderly brought back into the fold.

All in all it’s a thought provoking piece, and with 3 years in the making it's certainly a 'labour of love"'.