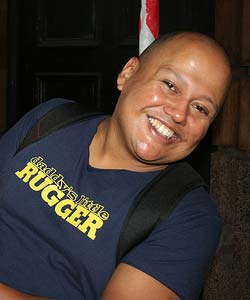 The latest offering at Queer Contact proved to be a very different one to that of #trwlmanchester last Saturday night,but was no less enjoyable.

Comedy Playground brought together a group of comedians with varying degrees of experience,to entertain a packed house.

First on Lee Peart is a young comic based in Manchester. While studying Performing Arts at University, he watched a few live stand ups and thought 'I want to try that!'.Last night he regailed amoungst other things, tales of school bullying for being gay and warmed an enthusiastic crowd up nicely.

Sophie Willan has bowled over audiences at Queer Contact before and last nights stories of her elder female family members did that once again.In doing this,Sophie effectively warmed up the Lesbian contingency in the audience,but was however well recieved by all.An indepedent girl raised by independent Grandmothers and Aunts it seems.

Leicester Mercury Comedian of the Year nominee and Latitude New Act of the Year finalist, Suzi Ruffell graced the stage to end the first act and with several moments of truly hilarious anecdotes and observations about modern day social media,full of self effacement and Lesbian 'in' jokes,she closed the first half beautifully,leaving a well entertained audience heading for the bars eager for more.

Described once by The Guardian as'Always fizzling with indignation and throwing out a hugely enjoyable mix of brutal putdowns and richly funny stories, Lyons has what it takes to delight any crowd,'Zoe Lyons confidently demonstrated why she is regarded so highly on the Comedy circuit.A pretty fit looking 42 year old,she told us,gripped the crowd,who were now roaring with laughter at almost everything she said and we all felt well and truly IN The Comedy Playground.

Recently to be seen on Channel 4's comedy FRESH MEAT,Sarah Emmott was next up and  took us forward in act two with funny tales of her 'shelf'(her generous gluteus maximus),showing why she is such a favourite with the Manchester based Laughing Cows audiences at The Frog and Bucket.

Bringing up the rear,so to speak,With his cheeky, irreverent and, of course,his trademark camp blend of incisive stand-up, razor-sharp improvisation and superb audience rapport,was the much loved and very Scottish Craig Hill.Many of the audience we spoke to mentioned first 'discovering' Craig at the much missed, Queer Up North,when he brought the house down on more than one occasion.His impressions/parodies of Madonna,Whitney and Britney were fabulous funny and we were all now firmly in his comedy hand..The constant banter with individuals in the audience also thoroughly entertained and we could have easily have enjoyed another half an hour or so.

This entire event was deftly handled in the expert hands of MC Jonathan Mayor,who yet again demonstarted what a tremendous talent he is.His constant audience interaction produced great comedic effect,which together with some very moving references to his personal 'battles'glued the whole evening together.Indeed he opened the second half by getting the entire audience to link hands for a short film on his phone as part of Manchester's support for LGBT Russians.Soon to be found at #sshhi.Only Jonathan Mayor would think to do that on such a night.

All and all,the Comedy Playground delivered expectation admirably and we left entertained and inspired.Well done too the team at Queer Contact too,who thought about this in the first place.

For details of other planned events.Click Here now.