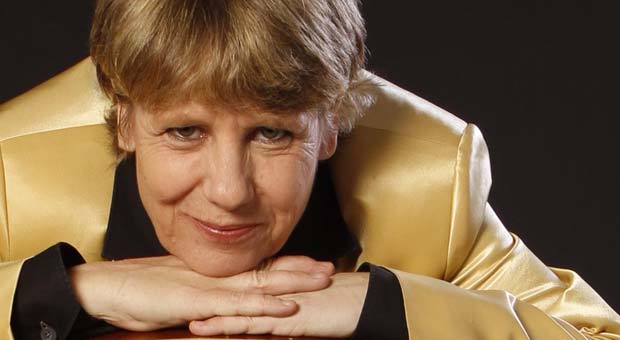 Clare Summerskill at The Brewers

“I’ve Been Clare Summerskill” is an eponymous new standup comedy show which was on at Brewers on Canal Street on Friday 27th May. Radio 4 considers her to be a lesbian Victoria Wood and it’s an accurate description. She styles herself as very focal and fairly vocal and the 2 part set contains amusing songs as well as exploring the human condition from a sapphic stance.

Being dumped via Skype was retold with candour, and taking up golf with its impenetrable language of birdies and eagles was a tale that had us tittering. Other discussions such as exploring why lesbians have cats as pets, the choice of Marks and Spencer as a supermarket, cycling, and Sarah Lancaster kept us all very amused.

The songs were original and she accompanies herself on guitar with a style bordering on blue grass.The lyrics are clever and witty, and were totally appreciated by a modest, but enthusiastic audience.

Clare is also a playwright and there was the opportunity to buy some of her plays and CDs after the show.

Clare Summerskill delivered an evening of sparkling wit and clever observation and we highly recommend that you try to catch her next time she finds herself in Manchester.