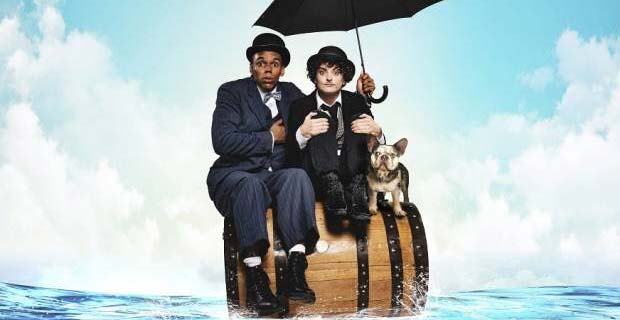 Charlie & Stan, a production by David Pugh, Told by an Idiot and Theatre Royal Bath, opened at the Lowry’s Quay Theatre on September 13th. It’s a “true fantasy” of Charlie Chaplin and Stan Laurel’s trip to America with Fred Karno. It’s performed mainly in mime, with projected titles, and is predominantly slap stick with some audience participation. It runs for about an hour and twenty minutes with no interval. It’s a production like no other.

Both Jerone Marsh-Reid (Stan) and Danielle Bird (Charlie) capture the gestures and mannerisms of their alter egos perfectly. Nick Haverson is perfect as the brash, swaggering Fred Karno (and is a skilled drummer). He plays other characters – notably Oliver Hardy – well too. The entire production is held together superbly by Sarah Alexander at the piano, and she also plays Charlie’s mother.

The set is excellent, with the 11 scenes taking place on the SS Caimrona, the ship that carried them across the Atlantic. Some are in flashback and some in flash-forward. It made for an interesting if slightly confusing timeline. In one of them the rewound action ends up on the cutting room floor. In another, “Is there a Pianist in the House” was a nice reworking of the more usual request for a doctor.

Covid restrictions were taken on board (literally) with great humour, and the arrival into New York, by which time our two main entertainers are no longer speaking to each other, brings things to a close, with Charlie being given a very simple makeup adjustment before taking up his trademark walking stick and shuffle to complete his character.

Charlie & Stan runs until the 18th September, and is a great bit of escapism that we could all do with.

More details and to book here.