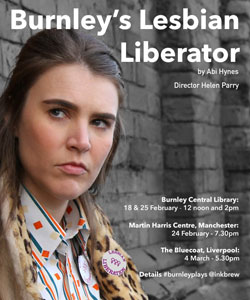 LGBT History Month always serves to demonstrate that no matter how much we know about our history, there are plenty more remarkable hidden stories from days gone by, just waiting to finally reach our consciousness. For me, the theatre of the festival is a particular highlight.

Hot on the heels of last year’s excellent Mister Stokes: The Man-Woman of Manchester, Stephen Hornby & Abi Hynes continue their mission to showcase the forgotten (or if you like, barely even remembered) plights of our LGBT ancestors.

This year, it was but a short hop back to 1970’s Burnley. Yes, who knew Burnley was steeped in rich LGBT history? Such is the significance of the heritage, Hornby and Hynes took on a story each and made a double-bill of it.

First up, The Burnley Buggers’ Ball written by Hornby, tells the story of a watershed moment for gay men; the 1971 meeting at Burnley Public Library where gay rights campaigner Allan Horsfall and fellow members of the Campaign for Homosexual Equality, Ray Gosling, Ken Pilling and Michael Steed, fought to open gay membership clubs, or Esquire Clubs, despite strong opposition from the community. The audience were thrust into the infamous gathering and with the lovely touch of planted heckles coming thick and fast: we were immersed in the action.

Told through the eyes of working-class hero Allan Horsfall as he reflected on his life and revisited the events of that infamous meeting, actor Michael Justice proved a wonderful anchor to the story; portraying a brave and pioneering man who despite being hugely significant for the LGBT movement, wrangled with doubt and shame of not doing enough during this historically significant meeting. Namely the split second decision not to stand up when fellow campaigner Andrew Lumsden, played by a colourful Christopher Brown, asks all the gay people to stand.

Rich writing balanced the poignancy of the story with moments of humour and the cast seized the opportunity to embody these vivid characters. Particularly Jospeh Carter’s turn as charismatic journalist Ray Gosling, and Judy Holt as a foreboding mother who takes the stand to tell the story of her son who took his own life because he was gay.

It’s the telling of stories such as this which make this festival so important. It cannot be underestimated the effect these lesser-known working-class northerners had on the path of LGBT rights. My only regret is that I wasn’t able to attend the performance at the Burnley Public Library where the events actually unfolded all those years ago. I’m sure it added all the more to the significance of the affair.

Seamlessly moving into the second piece of the evening, Hynes’ Burnley’s Lesbian Liberator, I must say as a lesbian, it was a treat to see a female story brought to life. Emily Spowage was terrific as Mary Winter, a determined force for equality who as a bus driver in the 1970’s was sacked simply for wearing a badge which said ‘Lesbian Liberator’.

Alongside her friends Mo and Susan, Mary sets about organising a demonstration to fight against her sacking and raise the profile of the plight of her fellow women. Susan, played by Emily Heywood is a great antagonist to Mary - a sexually fluid woman who doesn’t want to rock the boat by protesting (a telling issue of the time it seems), whilst Judy Holt plays a delightfully bolshy Mo. The characters bounced off each with ease and harnessed the power of women coming together with true working-class northern grit.

What chimed most about this performance were the questions and issues around how LGBT women are treated in history, both in terms of how they are remembered and the reaction of the time. It’s positioning within a double-bill made it all the more pertinent.

The simple juxtaposition with the proceeding Burnley Buggers’ Ball demonstrated the stark differences in the battles faced by LGBT men and women respectively, even though the goals are ultimately the same. Whilst the male cause led to public meetings and vocal disapproval in the public arena, Mary’s story is quite the opposite.

She’s silenced, swept under the carpet and no one is willing to listen. Lesbian existence wasn’t acknowledged. Strange to think this remains an issue today where lesbian visibility, though improved thanks to people like Winter, is no where near the visibility of our male counterparts.

We learn that Mary Winter disappeared after the ‘failure’ of her demonstration and sadly has not been heard of since. Of course she was wrong to think her actions were ineffective, as this performance demonstrates. It’s fascinating to think that Mary Winter is plausibly still out there in the world. I wonder how she would feel to learn that her story has finally taken centre stage?

Once again, Hynes’ writing delves into history and delivers an accomplished emotional exploration of the facts with a vibrant and thought provoking piece.

You cannot ignore the significance of The Burnley Buggers’ Ball and Burnley’s Lesbian Liberator within our current political climate. Themes of protest and the fight for equality have never felt more important.

We should be looking at these incredible pioneers of history and recognise that our own acts of protest, no matter how small, shouldn’t be underestimated. Who knows, in years to come, LGBT History Month might write a play about our seemingly small acts of defiance which may inadvertently spark a revolution.