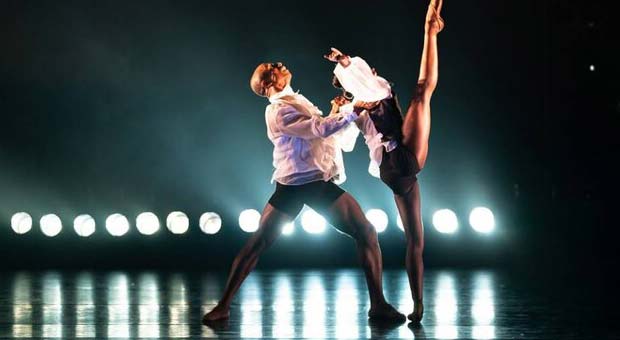 Black Ballet at The Lowry

Ballet Black performed their double bill of Then or Now plus The Waiting Game at The Quays theatre on October 12th and it’s on for a further evening on the 13th. The two halves could not be more different.

Then or Now is a series of narrated classical ballet episodes choreographed by Will Tuckett. The words are poems by Adrienne Rich, some of which aren’t easy to grasp, and the intervening music (mostly a discordant violin) is by Heinrich Franz von Biber.  The performance as a whole is in a sort of sonata form. We have the opening poem (the exposition), some more poems with music (the development) and then the closing poem is a recapitulation of the opening. The urgency of the music is very well reflected in the dance, which is superb, and the energy is palpable. The final minutes are unnarrated and the music takes over to bring the piece to an end. The applause was well deserved.

The Waiting Game is a much more approachable piece in three movements, choreographed by Mthuthuzeli November – who also stars in it. The programme indicates it explores the absurdism of existence and the uncertainty of tomorrow. And it does. The dance here is more modern with dream sequences and expressive use of light, and turns into a ballet chanté. The energy from the first half of the evening is just as present here – Lord knows how – and the final movement provides a very jazzy ending. It’s a happy one too.

Go if you get the chance.