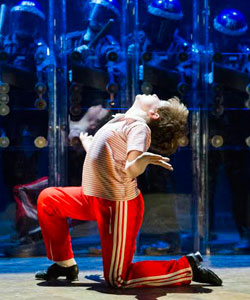 Billy Elliot at the Palace Theatre

Billy Elliot at the Palace Theatre

The UK tour of Billy Elliot is the first time the show has been seen in the regions, and if the roar of the audience on the night I attended – was anything to go by? He’ll be dancing his way back very soon.

The show is based on the hit film and features a young Newcastle lad who swaps his boxing gloves for ballet shoes. His dance teacher Mrs Wilkinson discovers that he is a mighty talent and gets him to apply for the Royal Ballet school.

Meanwhile, his dad belongs to the mining community and against a backdrop of Thatcherism, money is tight as the strike deepens and the sense of male pride at working for a living is diminishing. Add Billy’s friend Michael, who secretly likes wearing his mum’s clothes, and you have the recipe for a startling look at social class, gender and the harm that ill thought-out policies create for tight knit communities.

Excellent songs such as “Solidarity” and “Merry Christmas Maggie Thatcher” take swipes at what was going on, with heaps of satire. But, beneath the politics lies a heart-warming story which breaks you every five minutes.

Lewis Smallman holds the stage, as the title character. He is a triple threat, as his acting, vocals and athleticism all astound. He is perfectly matched by local lad Samuel Torpey who has the audience on his side from the minute he steps onto the stage, his comic timing is perfection.

Annette McLaughlin’s Mrs Wilkinson goes beyond caricature. This chain smoking dance teacher has dreams too, and they are all passed onto Billy. Her scenes with Lewis Smallman are electric.

The set, lighting and super sound design compliment what is already a perfect production.  I have already booked for a return visit.

If you want a musical which reflects not only the past but the times we live in now, but with a feel-good factor dialled up to 10; Billy Elliot is the show for you!