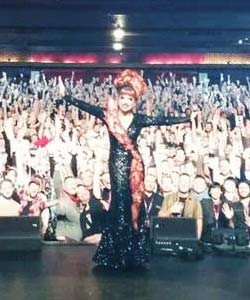 We're very fortunate to have been given access to Bianca Del Rio's sell out show in Manchester for her 'Not Today Satan' show.

Bianca has toured all around Australia, USA and the UK, selling out the majority of her shows and Manchester was no exception.

The show was about to start, the lights covering the audience were switched off and none other than RuPaul himself appeared... ok, just his voice. A message to the audience giving prior warning to those who may be easily offended, please leave the show! Mama Ru wasn't playing when she said that!

How could we describe Bianca's comedy? Erm... truthful, very tongue in cheek and 100% (C U Next Tuesday!) After all, this is Bianca we're talking about and she'll probably agree with us.

If you're gay, lesbian, straight, handicapped, terminally ill, a hoarder, fat or Republican then prepared to be shook... then again, if you know who Bianca is then you should expect nothing less.

There were plenty of laughs and YAAASSSS' coming from the audience, but you have to remember this was the gayest show in the UK right now.

The winner of RuPaul's Drag Race Season 6 mentioned the drag queen who gave her the title of 'America's Next Drag Superstar' more than on one occasion, mentioning something about her tasting of peppermint... if you attended the show then you'll know what we're talking about; but we won't spoil the show for those of you that are due to attend in another city.

The show closed with a final Q&A from the fans from the 'meet and greet'. One of our favourites was:

Q: "Would you rather be Donald Trump's jockstrap or Melania Trump's tampon?"

A: "Melania's tampon... so she can have something other than 2 inches inside of her!"

If you're lucky enough to have 'Meet & Greet' tickets for her upcoming show, then we strongly advise you to come up with some questions for Bianca.

Would we say we'd see her again? YAASSSS!!!!

It's not the first time Bianca has been to Manchester and wowed us and it certainly won't be the last.

We highly recommend you get tickets to one of her next upcoming shows if you can, there's limited availability on the ones that haven't already sold out.

We'd like to thank Bianca for the entertainment and MJR Group for managing the event.