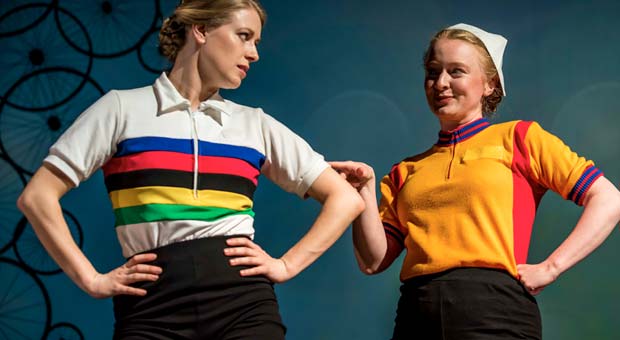 “Beryl” is the engaging story of the life of Beryl Burton, one of the greatest cyclists the UK has ever produced, and probably the greatest we’ll ever produce. It’s written by Maxine Peake and continues at the Oldham Coliseum until Saturday May the 21st before continuing on tour to Keswick and Lancaster. It’s a very entertaining evening with a few moments of poignancy to level things up.

It’s a sad fact that Beryl is now virtually forgotten but this play should, with luck, remedy things. It’s energetically performed by a cast of 4 (Tori Burgess, James Lewis, Charlie Ryan and Elizabeth Twells) who each take several roles as this fast-forward retelling of Beryl’s life unfolds. All 4 have a great rapport with each other and must be exhausted by the end as the amount of time spent pedalling is enormous.

We’re transported back in time to when cyclists didn’t wear lycra (or crash helmets), bicycles were solid machines rather than shadows made of carbon fibre, and old-fashioned shops like Skidmores (Union Street) or Astley’s (Heron Street) still existed. It’s all good fun and at times quite camp. The portrayal of Her Majesty awarding the MBE to Beryl is hilarious, as is the moment when the police stop Beryl and Charlie (her husband) on their way back from Nelson.

In her more than 3 decade career Beryl gained too many awards and trophies (including a Reliant Robin) to list but you can find them here https://en.wikipedia.org/wiki/Beryl_Burton. Not bad for a young Yorkshire lass who harked from the “Rhubarb Triangle”. The moment anyone said she couldn’t do something she proved them wrong, from her teacher’s admonition that she’d be a failure, right to the very end where at the age of 59 she died in the saddle delivering birthday invitations – despite being told her heart couldn’t cope any longer.

As well as wonderful performances from all 4 on stage, the set is excellent and the use of a projected backdrop transports us to the Yorkshire Dales, Leipzig, and several other locations.

Beryl was an amazing woman who took life by the throat. She had a hard life. As the play indicates money was tight – she never became professional – and when she was eclipsed by her daughter the press turned on her. She had several accidents, some of them very nasty indeed and all very well portrayed, but she ploughed on when anyone else would have given up.

This is a play with the feel good factor, but which also shines the light on the darker moments of Beryl’s life, and it’s fantastic that her memory has been revived. Full marks.

Details and tickets are HERE