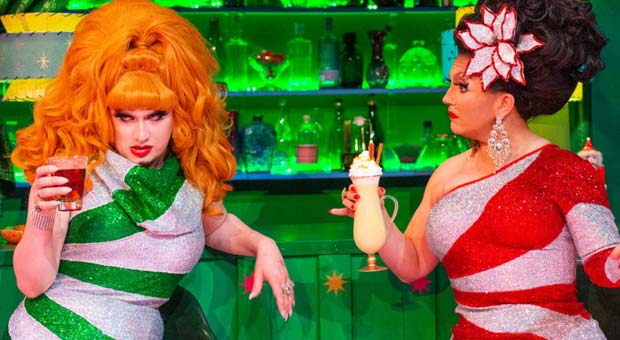 It's hard to believe that it has been 2 long years since Jinkx and DeLa last brought their Festive Show to Manchester but after a global pandemic and numerous lockdowns here we are again. For one night only, two of the most memorable stars from RuPaul's Drag Race gave us a little bit of festive cheer as Christmas fast approaches.

DeLa and Jinkx both have very different takes on the holiday season with DeLa preferring to get up in the charm whereas Jinkx is a little more cynical about the holiday. The two have excellent chemistry and it's clear that they work well together. The show is professional, witty and clever. The VT clips work particularly well in keeping the audience engaged whilst the queens make their remarkably quick costume changes.

The original songs are great and generate as many laughs as the comedy moments. The character of Peppermint gets old real fast but I feel like that's the point. We want to see DeLa and Jinkx together. I was rather hoping that the puppet would get destroyed at the end but that wouldn't be very in keeping with the Christmas spirit

The show was entertaining throughout and there were no dour notes at all. The show worked well at the Palace and the audience were certainly onboard. The show is evidently scripted but the queens certainly could engage with the audience where required. If you get the opportunity to see the show before it returns to the States we would certainly recommend it!