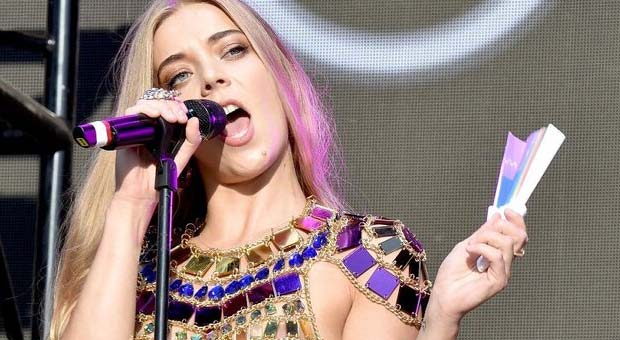 The long awaited debut album from Becky Hill ‘Only Honest on the Weekend’ was released on the 27th August and with it comes the much anticipated tour which sees the singer take on more intimate venues across the country.

Following her successful run of festival shows this summer, Becky Hill’s second night of the tour took place at Manchester’s O2 Victoria Warehouse where she performed to a sold out crowd of 3500 fans who are still lapping up the opportunity to experience live music after such a long hiatus due to the pandemic.

Despite the cold weather, fans were already pumped and ready for the gig to begin as the crowd sang and danced in the queues outside, in-between showing COVID passports and lateral flow test results, of course.

The support act was up-and-coming R&B artist Richard Fairlie, who motivated the crowd with hits ‘The Reason I’m Breathing’ and ‘Poison’ to name a few. Showcasing his show-stopping vocal range, he proved that he is one to watch for in the future. Fairlie finally introduced the much-anticipated main act who came onto the stage to be greeted by a roaring venue who were ready to dance the night away.

Hill kicked started the night with radio favourite ‘Heaven on my Mind’ which was an energetic start of an electric set spanning 18 songs. Displaying her powerful vocals from the off, the crowd knew they were in for a night to remember. Hill continued to deliver the dance-pop anthems with wellknown hits ‘Afterglow’, ‘Gecko (Overdrive)’ and ‘False Alarm’, as well as getting into the newer album tracks ‘Through the Night (ft. 220 Kid)’ and ‘I Got You’.

As the crowd continuously chanted her name, Hill asked her fans to put their arms around each other because “Covid is f***ing over” and “we get to celebrate” to which she performed the dance favourite ‘I Could Get Used to This’.

She then took a moment to address the crowd to tell them how she’d spent her lockdown perfecting the album, stating she has “Worked hard to produce a set full of bangers and have worked equally hard to create a debut album full of [her] own thoughts and feelings of sh*t [she’s] wanted to say.”

With this, the show took a calm turn with slower tracks ‘Lessons’, ‘Distance’ and ‘Perfect People’ from her new album, which truly displayed her strong vocal abilities and highlighted her skill to convey meaning and emotion through her music, as many will remember from her first appearance on The Voice, way back in 2012.

Soon we were back to the album “bangers” as she aptly put it, as ‘Last Time’, ‘Wish You Well’ and ‘Better off Without You’ rang through the expansive venue and left nobody standing still with crowd singing every word back to her without hesitation. Followed by her latest single ‘My Heart Goes (La Di Da)’(with Topic) which is set to be a go to favourite/classic for DJ’s to fill the club dance floor.

Hill ended the night with her number one UK Dance chart hit ‘Remember (with David Guetta)’, which rounded off the gig leaving sweaty bodies everywhere and a satisfied crowd leaving Victoria Warehouse on a high.

Overall, the night was a huge success with a support act that got the crowd pumped just in time for Becky Hill to hit the stage, dust away the cobwebs, and remind everyone why they love live music.

Listen to Only Honest on the Weekend’ here.

1. Heaven on My Mind

5. I Could Get Used to This

16. Better Off Without You

By Samuel Grant and Luke Davies for Canal St Media