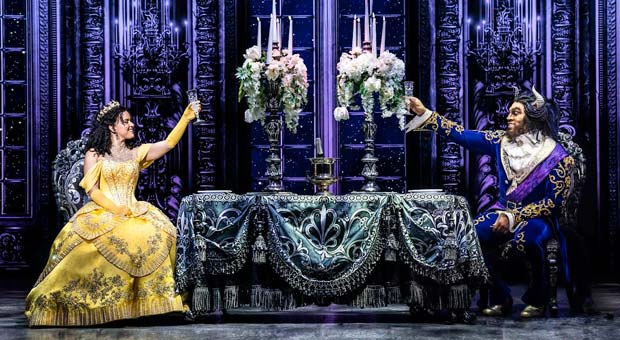 Beauty and the Beast

True magical tale, telling a “tale as old as time” with a nostalgic prologue by Angela Lansbury.

"Beauty and the Beast" is world-class, from perfect scenery, magical high notes and on point musical numbers. It's a piece of perfection that showcases the magic of Disney.

Matt West creates an immersive production that exudes the magic of Disney, creating a warm, fussy feeling inside. The cast is out of this world, imperfect, following every routine and using Disney magic.

Belle, played by Courtney Stapleton, delivers a perfect story of out of sorts girl in a French provincial town to princess. The Beast played by Shaw Taylor, of which I'm his number one fan, for his rendition of Beast. Shaw's voice paired with Disney's ability to capture reality and merge with the digital world is utter perfection. I have no doubt why Belle and the Beast fall in love.

For me, the stars are always Lumiere, played by Gavin Lee, and Cosworth, played by Nigel Richards. They are the perfect duo, from Cosworth getting his key to Lumiere’s actions for the perfect chandelier. Now you can't forget Mrs. Potts and Chip, played by Sam Bailey and Rojas Simpson. Sam Bailey played a perfect Mrs Potts character and for me (this will generate some opinions) became the teapot we know and love, bringing me back to when I first saw the film. Rojas is super adorable and definitely a star in the making.

Now Gaston and Fool Le For, played by Tom Senior and Liam Auckland. Became an incredible duo whose energy leaps across the stage, which delights and shines during the musical number 'Gaston'.

The musical interpretation by Menken, Ashman and Rice is big, bold and awesome. Nothing is bigger or bolder than "Be Our Guest", which is a complete Las Vegas extravaganza in its own right. A total assault on the senses with colour, light and a perfect blend of music, acting and "if you don't believe me as the dishes".

The entire show is a perfect blend of Disney magic, world-class vocals and fantastic set design combined with digital video that will fill you with joy no matter your age. I highly recommend Beauty and the Beast. If you're like me, you're going to annoying everyone by singing the songs on the way home.