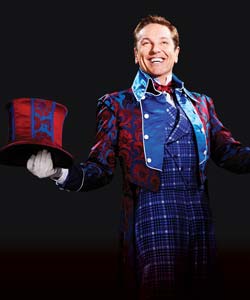 Barnum at The Lowry

Barnum guides us through the opportunities and challenges of the life of Phineas T. Barnum  (America’s Greatest Showman and second millionaire) culminating in the partnership that created Barnum and Bailey’s Circus - the Greatest Show on Earth.

Brian Conley, stalwart of TV and stage, injects the role of Barnum with his trademark cheeky-chappy persona. And it works! On stage for almost every scene, his tightrope walking may have wobbled on opening night, but his smile and energy never wavered – from the rousing Come Follow the Band to the tenderness of So Little Time with Linzi Hateley, who balances Conley perfectly as Barnum’s wife Chairy, the practical one who helped make Barnum’s dreams come true.

This is very much an ensemble production, with high energy acrobatics and circus skills demonstrated by a very fit and lithe cast, not just on stage, but throughout all three levels of the auditorium before curtain up.

The songs may not be memorable, but it’s slick, bright, colourful and brings the circus back to town.